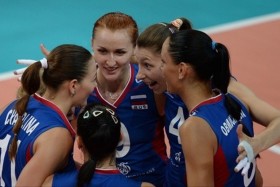 At the start of the first set Brazilians took the lead. They alocated their play, so the middle blocker Bruna and spiker Farinea had their role, together with the elegant Natasha. During the match, it was clear that Natasha was the leader in the Brazilian team. And she attacked a lot, blocked, and had aces. In the national team of Russia only fence was middle blocker Pankova.

During the break between sets Russian coach Yuri Marichev made a smart move – he replaced Irina Zaryazhko with Anastasia Shlyakhovaya. She powerfully worked on the pitch and increased the flow of the Russian team.

The second set was left without many problems for Russian women. Third, too, but in the end it began to pick out problems in the reception and Brazilian girls immediately started to use it, but the gap created by the Russians in the middle of the set, allowed them to bring it to win quietly.

In the tie-break knees have trembled at Brazilians. Russians gathered at a crucial segment of the match and held it a truly grand for the champions title at the Univerisade.

The best scorer in Russia was Nataliya Obmochaeva with 31 point, while in Brazil it was Bruna Silva with 23.

GRE W: Chatzinikolaou back to Vrilissia after 8 years