ECH M: European crown is no longer property of Serbia, Russia in finals 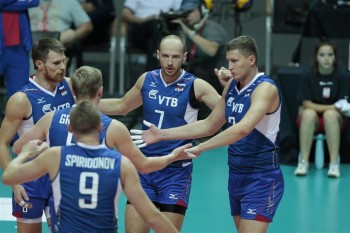 Russia have started the match better than defending champions.  After the first TTO, “Zbornaya” had a lead 8:4, and they continued to play very well. Russian block and serve was so powerful, Serbs couldn’t do anything. Head coach of Serbia, Igor Kolaković tried to motivate his players, also changed the opposite (Atanasijević – Starović) but it didn’t help. Easily than expected, Russia clinched the first set 25:19.

At the beginning of the second set, Pavlov asked for challenge, and he was right. Russia took a lead 1:0, then Atanasijević was blocked for 2:0. Later, Serbia succeeded to turn the score on their side, but with run 5:0 Russia again took a lead 14:9.

After this run, Serbia were close to Russia, but Pavlov was amazing in these moments and with few points led „Zbornaya“ to the 23:20. Then, Atanasijević served so powerful and crashed Russia’s reception for 23:23. Russia missed to score a set point, Ivović took the opportunity to bring Serbia one point away from taking the second set. And with Muserskiy’s error, defending champion tied 1:1 (26:24).

The result was tied after first TTO in third part of the match, 8:8. Voronkov asked for time-out, where he asked his player

“Are you gonna let to those young players to beat you?”

It was moral boost for his team. They started to play much better, and they had 16:10 on second TTO and 19:11. But Serbia made amazing came back with Kolaković’s few changes on the court and tied score 21:21. With Pavlov’s strong spike, Russia again took the lead 2:1.

In the fourth set, pressure had a great influence on young Serbian team and Russia easily took this part of the match for the final of the European Championship 2013. 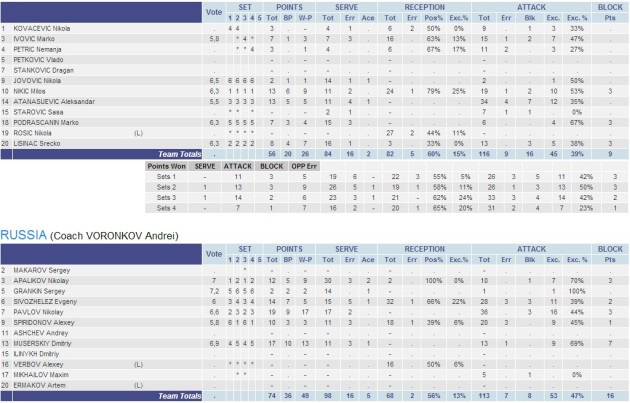 For more information about this competition click on European Championship 2013.

Scout technical video of this game is coming very soon in WoVVideo section. Untill then, feel free to browse here other games’s videos from this competition.