This game turned out the most persistent match of the quarterfinals. None of the teams didn’t want to give up , they were fighting until the last minute. In the first half of the game initiative was on the side of the guests from Ural. Players from "Lokomotiv" made a lot of mistakes, especially on the reception.Guest from Ural was making points on the serve, from the second row, and through the middle. 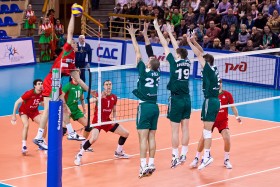 The first match of fourth playoff championship of Russia, March 5, 2012 LOCOMOTIVE vs Ural

“Lokomotiv”  came out with a completely different attitude in the second set. They  earned some points on the block, and played well in defense. Significant contribution to the victory in the second set made spiker Ilya Zhilin from Novosibirsk. Opponent couldn’t adapt to his smashing blows.

The third and fourth sets were held in equal fight. In the third set nerves were stronger in the Ural team, and in the fourth set victory celebrated the “Lokomotiv”.

The most dramatic was the fifth set. With a minimum advantage home team owned the important point. Now we are looking forward to the return match in Ufa, have no doubt that it will be as bright and intense, because the price of this matches is high: the semifinals.