After seizing the night last Wednesday by edging their opponents in straight sets, Russia’s Omichka OMSK REGION will play once more France’s BEZIERS Volley, this time at the “V. Blinov” sports complex. The game is scheduled for next Wednesday and will mark the fourth round of play in preliminary Pool A of the 2014 CEV DenizBank Volleyball Champions League – Women. 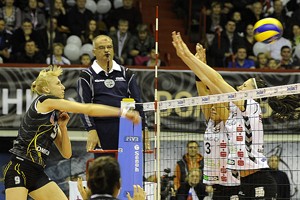 On Wednesday Omichka beat BEZIERS Volley in straight sets to cement their second place in the standing of Pool A which are currently topped by last year’s silver medallists Rabita BAKU of Azerbaijan. Omichka will be able to rely once more on their Cuban-spiker Nancy Carrillo who has scored 63 points so far in three matches, a feat which makes her one of the three best scorers in the competition. Natalya Mammadova is one of the best spikers of the League Round with 43 points while Marina Babeshina is ranked among the best setters. Omichka OMSK REGION also tops the charts for the best serving performance so far with a total of 29 aces.