After the Final Six of the Russian Cup and the annual “All Stars Game” that were held last week at the Cosmos sports hall, that Volleyball festival will continue in Belgorod Wednesday as the home heroes of Belogorie play Italy’s Diatec TRENTINO in the first round of the Playoffs 6, being only one step away from the Final Four of the 2014 CEV DenizBank Volleyball Champions League – Men. 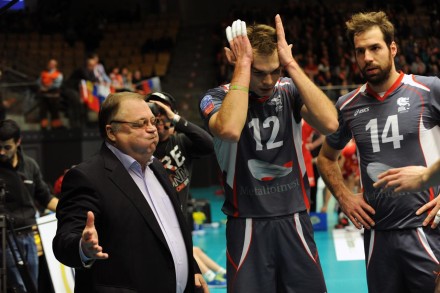 As for Belogorie, they have played 21 matches against Italian teams since they debuted in the European Cups about 20 years ago. BELGOROD had the upper hand 12 times and lost the remaining 9 matches. Belogorie previously got to test the likes of Bre Banca Lannutti CUNEO, Sisley TREVISO, Casa MODENA, ROMA Volley and Lube Banca Marche MACERATA, so TRENTINO will now be added to the list.

Though the local fans had the possibility to follow plenty of Volleyball matches last week, Belogorie mentor Gennady Shipulin is confident that the Cosmos sports hall will be fully packed also on Wednesday: “This match is very interesting and going to be tough. It is also a unique opportunity for our supporters to follow the teams that have dominated their respective domestic competitions lately. Belogorie and TRENTINO are the current national champions, Cup winners and Supercup winners in Russia and Italy respectively. So I expect two tough matches, something that is going to thrill our fans.”

FIVB will decide in August, Russia can...