RUS W: Ulanova will play at the Olympics

Russian women’s national team flew to Italy, wherethe traditional Edison Volley Cup is scheduled. On the eve of thetrip the team's coaching staff decided on another candidate for the Olympics - libero Ekaterina Ulanova 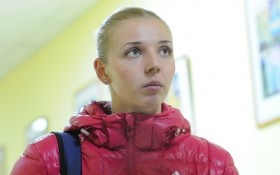 Fladislav Fadeev talked about the situation in the Russian team.

– In the media and on the website of ROC is a list of 12 players was published who are supposed to go to London, Borodakova, Gamova, Kosheleva, Kryuchkova, Matienko, Merkulova, Obmochaeva, Perepelkina, Sokolova, Startseva, Ulanova, Estes. Site of the Volleyball Federation of Russia, denied that.  Can you clarify the situation?

– For the competition in London, is conducted by the FIVB and the IOC. Under the rules of the IOC, we are obliged to submit a list of 12 players for the application on July 9, at the latest. The same criteria is from the National Olympic Committee. It is because of certain rules we must approve the list of participants in the Olympic team, not later than 21 days before the Games. However, the FIVB rules allow any team to make two changes in its composition for medical reasons until July 24. We planned to finalize the composition on the July 16.

– The main problem of the state Kosheleva and Merkulova, right?  They are in the list, but Merkulova is ijnured on the Yeltsin Cup, and Kosheleva is recovering from injury and it is unclear whether she will go to London.

– Yes, that’s right. If their health does not allow them to play in the Olympics, Kosheleva will be replaced by Makhno or Chaplina, and Merkulova by Moroz. All three will work with our team before departure to London and be sure to play as Ulanova in Alassio.

– Team is planned to come back to Moscow from Italy, will you play two friendly matches with Asian teams who have received the right to play in the Olympics?

– No. Neither Japan nor China and Korea want to play against us. We intend to practice anyway. In Alassio, we will play a friendly match with Italy after the tournament, and on July 25, we play in London with Brazil.

On the Edison Cup, Russians will play two matches. On July 13th Russia will play against Turkey. On July 14th Italy against the team that lost the opening match. On July 15th Italy – winner of the first match.