OG W: Russia power proves too much for resilient Italy 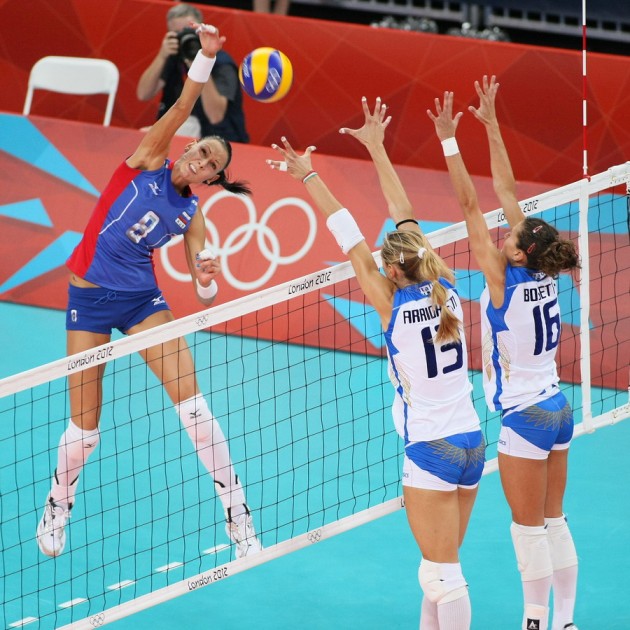 Russia finished top of the pool and will play the fourth-placed side in pool B. Italy finished second and will face the side that comes either second or third in pool B, following the drawing of lots after the end of Sunday’s play.

With the teams unbeaten after four matches, this contest pitted the power and height of Russia against the skill and speed of Italy.
With Simona Gioli, Carolina Costagrande, Valentina Arrighetti and Antonella Del Core prominent, Italy raced ahead. But Russia, led by Ekaterina Gamova and Nataliya Goncharova, pulled level at 14-14 and then again at 24-24. Italy then saved two set points before winning the set 28-26.

Russia led for much of the second set. Supported by Maria Perepelkina, Gamova and Gonchariva continued to spike relentlessly. This time the battle of power prevailed, with Russia surging ahead to win the set 25-19.
Arrighetti, Costagrande, Gioli and especially Lucia Bosetti contributed to put Italy 14-7 ahead in the third set. Russia fought back, but Italy held on and converted their second set point to take it 25-22.

Russia went 8-0 ahead in the fourth set as Italy made mistakes and could not handle Goncharova’s bombardment. They regrouped to win points, but Russia’s lead was too big and they won the set 25-16.

The final set saw Costagrande put Italy narrowly in the lead before Russia levelled. But Goncharova and Gamova stepped up, and their hard spiking eventually won the set 15-11 and clinched the match.

Goncharova was the match’s top scorer with 33 points, while Gamova picked up 31.