Lokomotiv Novosibirsk will play in the Russian Cup Finals for the 5th time in club's history! 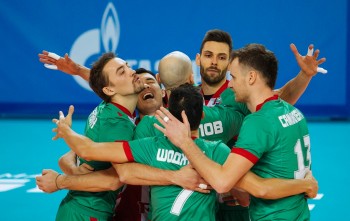 The 1st semifinal match of the 2016 Russian Cup was very exciting, while at the end Lokomotiv Novosibirsk prevailed over Belogorie Belgorod.

The heroes of this match were Lokomotiv players Sergey Savin and Nikolay Pavlov, who were simply unstoppable today.

In the opening set two of them scored 16 points combined, while it was Pavlov who made the last point for 32:30.

In the 2nd set, Lokomotiv gained the crucial lead by escaping to 17:14, while then it was Sergey Savin who made the final attack for 25:23 and Lokomotiv were up by 2-0 in sets.

Belogorie managed to answer back by winning the third set. The squad from Belgorod were down by 20:22, but they tied the score at 23:23. Then Ian Ereschenko scored and put Belogorie in front at 24:23, while finally Maxim Zhigalov made an ace for 25:23.

However, that did not help Belogorie to stay undefeated in this match. In the 4th and the final set Savin and Pavlov once again made series of good attacks, while Lokomotiv eventually won the set by 25:19 and the match by 3-1.

This will be the 5th time for Lokomotiv Novosibirsk to play in the Russian Cup Finals. They won the trophy in 2010 and 2011 by beating Dinamo Moscow and Kuzbass Kemerovo respectively, while they suffered defeats in 2009 and 2014, both times against Zenit Kazan.

RUS W: New head coach of Russia will be from male volleyball!