Zenit KAZAN, outplayed VfB FRIEDRICHSHAFEN 3:0 and secured first place in Pool A having qualified for the Playoffs 12 ahead of time. Kazan contributed a perfect gift for head coach Vladimir Alekno who had celebrated his birthday the day before the match. 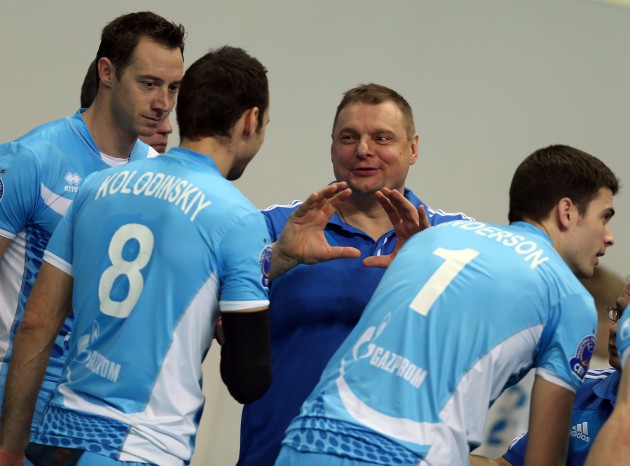 The match against VfB FRIEDRICHSHAFEN turned into a debut with the jersey of Zenit KAZAN for US American middle-blocker David Lee. He had been waiting for this moment for two weeks and that’s why setter Valerio Vermiglio profited of every chance to play jump set – 10:6. Via the numerous mistakes made by the guests from the serving line, Zenit KAZAN kept the lead till the end of the set (25-20).

The Germans suffered the crafty serves by David Lee in the very beginning of set two. Evgeny Sivozhelez easily scored free balls and spiked gaining 4 points running – 6:1. The players of Zenit were performing really well in defense and masterfully controlled the game. The set ended up with spectacular and spicy attacks by Maxim Mikhaylov (25-17).

In the third set VfB FRIEDRICHSHAFEN performance on court was rather dreadful. The German team simply stumbled in reception and there was none to lead the attack. With Nikolay Apalikov serves Zenit KAZAN broke away extending the lead to 7 points (18:11). KAZAN claimed a convincing victory and contributed a perfect gift for head coach Vladimir Alekno who had celebrated his birthday the day before the match.

“Zenit KAZAN players served pretty well and we failed to cope with their serves. In the first set we still had some chances, but in the end of the match we made too many mistakes” said the team captain of VfB FRIEDRICHSHAFEN Joao Jose.

“The team managed the task they had been given before the match, that’s why they succeeded in scoring a confident victory. I would like to thank our fans for the amazing support that we have enjoyed throughout all three sets. That match has become a good present for my birthday. My heart is filled with joy!” said the head coach of Zenit KAZAN, Vladimir Alekno.

RUS M: Dinamo edges Fenerbahce to keep its chances to make it to Playoffs 12