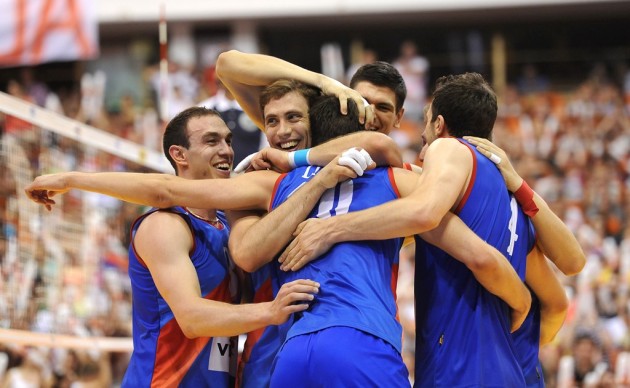 The setter Bruno Rezende came back to play for Brazil after expiring the suspension that had been imposed by the FIVB.

From the very beginning of the game both teams were playing very well, so the result was tied. Away side managed to take the lead at the first TTO, 8-7.

Brazil created the first big advantage after this time out, 11-8! They kept the lead and even increased it 16-12! Simply, the away side was much better in the attack, while home team was constantly making mistakes (13-18).

Grbić side had a very tough job to make comeback and they did it! They reducued rival’s advantage to only one point, 20-21. But after Wallace’s block on Petrić, Brazil took three-point lead again and afterwards, they won the first set 25-21. Lucarelli scored the last point!

We saw the same start in the second set, both teams were fighting hard but again Wallace was too good from the service line for 9-6 lead. Brazil managed to keep the advantage and after 18-15 lead, Serbia made comeback!

After great defending of Serbia and Podraščanin’s block, away side had one point of lead. Then referees made few confusing decisions. Firstly, Brazil got the point (18-20), Grbic called for video check, referee corrected decision (19:19) and after a huge pressure from the Brazilian players he decided to repeat the point (18-19).

It had influence on Serbian team and Brazilian side took the opportunity to increase lead in set to 2-0. After three set points, Lucas used the fourth (25-23).

In the third set, home side managed finnaly to take the controll of the match. After Brazil’s lead at the first TTO, Serbia had three points of advantage 16-13.

They were absoulte dominant and kept the score until the very end of the match (24-21). Away side managed to score two points in row but Lucarelli’s mistake from the service line gave Serbia third set 25-23!

Grbic’s side was very good in the fourth set as well. They continued to play very well, while Brazilians were trying to silence the crowd who were helping Serbian team a lot!

The result was uncertain until the very end of the set. After mistake of away side, Serbia went to a 3-point lead (20-17). Marko Ivović destroyed the floor from pipe and gave his team 23-19 lead!

Brazil couldn’t make comeback and they had to surrender. Serbia tied the score in sets 2:2!

In the tie-break, both sides started very well but after Podrascanin good move and Lucarelli’s mistake, home team had 8-6 lead!

The key moment was at the result 12-11, when referee gave a point to Brazil, but after video check, Serbia got the point for 13-11 lead!

Home side had two match point, Lucarelli saved the first, but Fonteles made a service mistake for the huge celebration of Serbian side!