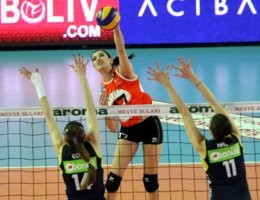 Ayazaga storm was felt in Uskudar early in second set 2:5, however provisional lead was broken by a time out to 6:5, but leadership went to Oranges after solid blocks 6:8. All the players on the court gave their best for the teams as Fenerbahce led the second mandatory stop 16:14, but remainder for Eczacibasi was just a nightmare, locals did not let them play anymore to close the stage 25:17.

Eczacibasi was having reception trouble, this was followed by attack errors, so that, FB Universal dominated game passing checkpoints 8:5 and 16:11, tighten up every single rally to arrive last point 25:17 once again.

Neslihan Darnel’s services carried Eczacibasi to a provisional 1:4, then FB bounced back to arrive first tech time out at 8:6, managed to save it in second one 16:15. Local team did not look behind anymore and seized set 25:22, won the match 3:1.

TUR W: The girls from Eczacibasi are...