Less than 24 hours before the start of the final stage of Europe’s most elitist and prestigious competition, coaches and captains of the participating teams informed the press about their last preparations for Saturday’s semifinal duels and took time to answer the questions of the many journalists from international and national newspapers, radio stations as well as TV channels. Read latest volleyball news on Worldofvolley.com. 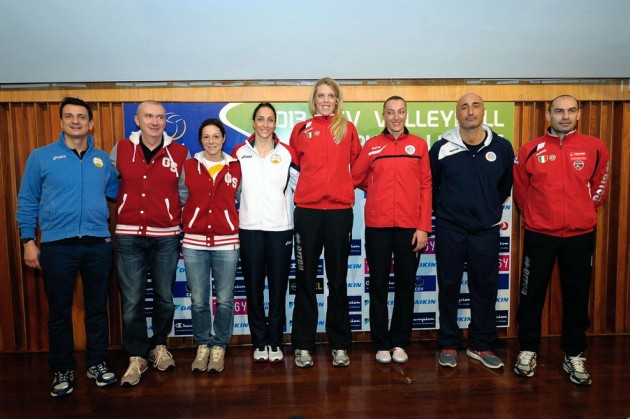 Coaches and captains were united in saying that the 2013 CEV Volleyball Champions League Final Four – Women was the strongest edition ever with four teams ready to win Europe’s club crown.

Marcello Abbondanza, Head Coach Rabita Baku (AZE): “We are very happy to finally attack the last stage of the competition. My team is composed of international experienced players, I’m sure they’re prepared.”

Mira Golubovic, Captain Rabita Baku (AZE): “Since August we are working hard for that kind of competition. There is no doubt about our enthusiasm. We’ll do everything to reach the gold medal match.”

Giovanni Guidetti, Head Coach Vakifbank Istanbul (TUR): “I’m very proud to be here. We had very strong opponents so far; I’m happy we finally made it to last stage. I’m convinced that this year’s Final Four is the strongest one since several years. The four teams represent probably the best leagues in Europe.”

Gözde Sonsirma, Captain Vakifbank Istanbul (TUR): “It’s a great honor for me to play here against Europe’s best teams. My teammates and I will do our very best to make it to Sunday’s final. On the other side, we are looking forward for an outstanding Volleyball show.”

Carlo Parisi, Head Coach Unendo Yamamay Busto Arsizio (ITA): “It’s a historical moment for our club and team. We are very proud to represent our city and country amongst the best teams in Europe. I’m very curious about the outcome of the competition; the playing level will be very high.”

Christina Bauer, Captain Unendo Yamamay Busto Arsizio (ITA): “It’s a big achievement to have made it to the Final Four. Our motivation is huge; we will give a 100% to fulfill our wishes.”

Massimo Barbolini, Head Coach Galatasaray Daikin Istanbul (TUR): “It’s a big pleasure for me to return to the Final Four of CEV Volleyball Champions League. My team has worked very hard during the last month; I think we are ready.”

Eleonora Lo Bianco, Galatasaray Daikin Istanbul (TUR): “Many thanks to our club for hosting this outstanding tournament. I hope my team will return the favor on the court. We are all waiting for tomorrow, let’s the Final Four start.”