TUR: Turkey’s got talent as Yigit combines Volleyball with excellence at school

Ankara, Turkey, February 26, 2012. Yigit Gülmezoglu is one of the players included in Turkey’s junior national team that is already preparing for the second round qualifiers scheduled for mid April with the ambition to make it to the final round of the 2012 CEV European Championship coming up later this summer in Poland and Denmark. He is nevertheless not only one of Turkey’s rising Volleyball talents but also an outstanding student. 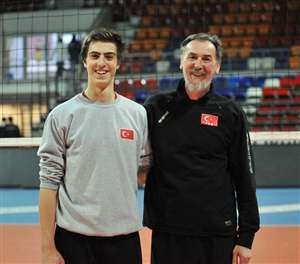 Yigit is currently attending the “Tevfik Fikret Fen Lisesi” in Izmir, one of Turkey’s most prestigious and qualified high schools, thereby combining his involvement in Volleyball with excellent results there as well.

He already graduated from that same elementary school with the highest distinction and he is currently considered the second best student of this lyceum.

He is fluent in English as well as in French and has already received some scholarships from the government.

Having started his Volleyball career with Arkas IZMIR, Yigit will be playing for the next couple of years for the team representing the Volleyball high school established by the Turkish Volleyball Federation.

Yigit is very talented and was originally competing in fencing, being a national champion before some coaches advised him to exploit his speed and agility in Volleyball.

“I come from a family that is sports-oriented, with some members having practiced sports like handball, swimming, tennis or wrestling, but none had played volleyball so far. I have made my choice for this sport and have no regrets” he says.

Questioned about his dreams for the future, in spite of his young age Yigit sees it already pretty clear: “My only goal is to develop into a very successful professional Volleyball player and I am ready to work hard to fulfill this dream. I started playing as setter and right now I am a wing-spiker, but I can play in all positions. Volleyball really takes plenty of my time and the remainder is devoted to my studies” he reveals.

GER: Duren and Mitteldeutschland in playoff