Emre Batur is probably one of Turkey’s most known Volleyball players out there and his fame got an additional boost last week as he was among the players who won silver at the Final Four of the 2014 CEV DenizBank Volleyball Champions League – Men. 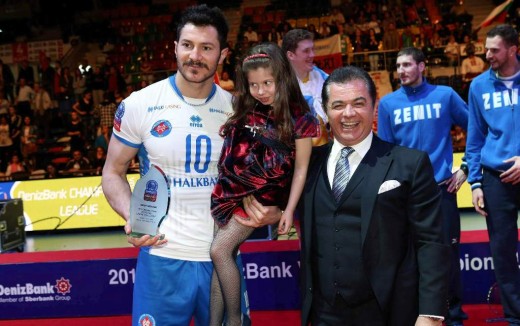 The middle-blocker also got the award for the Best Server of the Final Four Tournament and easily turned into the favorite hero for the many young boys who cheered on Halkbank ANKARA from the stands of Baskent Volleyball Hall.

“There are many positives we can take from the Final Four weekend,” Batur says. “It was the very first time that the Final Four of the men’s competition was held in Turkey and it was also my first appearance in the last and most exciting stage of Europe’s elite competition. We also played against some of the world’s best Volleyball players. The only bad memory is linked with the fourth set of the final with Belogorie where we were leading 22:17 and ended up losing the match. Still I believe that after the Final Four we got an extra boost of confidence and we now see our opponents in a different way. Apart from that ominous fourth set, I think that we all had a very good experience,” he continues. “Personally, whenever I make mistakes, I always get demoralized but this has changed now. During the matches of the Final Four, even after making silly mistakes, I always found a way to re-energize myself and motivate the other members of the team. So, starting from this experience, I think that the Final Four weekend will have a positive impact on me and on the whole team as well. We are ready to go for more success in the future.”

Halkbank really wanted to win gold at home to write history for men’s Volleyball in Turkey but in the end the home heroes had to be content with silver.

“We played before 7,000 fans and it definitely was an advantage for us. I am happy with the silver medal because we could even have finished our campaign in fourth place. And by the way, Belogorie is a very strong team so they deserved this title.”