Eczacibasi Vitra has become the champion of Europe for the first time in club's history!!! Turkish team, which was founded 49 years ago, has finally managed to take the Champions League crown by defeating Busto Arsizio in the final match. 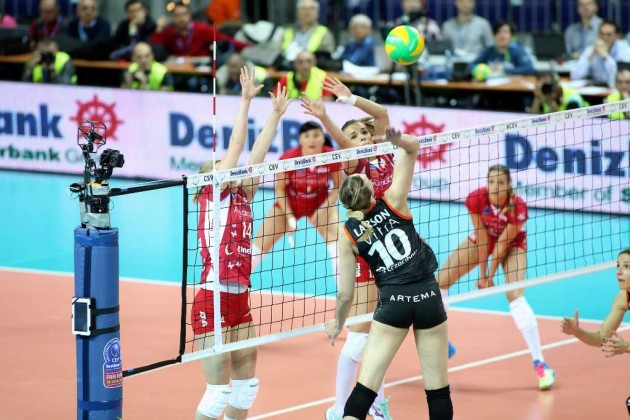 The big final started with the classic exchange of points. Both teams were very careful at the beginning, so we had a point-for-point game all the way until 11:10 for Busto Ariszio. Then, the Italian team started to push ahead… With Valentina Diouf and Ekaterina Bogacheva Lyobushkina in the right mood, Busto went on the second TTO with 4+, 16:12! Eczacibasi simply had to change something. And, head coach Giovanni Caprara made perhaps the crucial decision. He changed setters! Nilay Ozdemir replaced Asuman Karakoyun and brought a big turnaround!

Interesting enough, the second set had almost the same beginning as the first one. The teams were close until 11:10, again, but with one minor difference. This time Eczacibasi was ahead by one point, and this time the Turkish team had the first push. Caprara’s girls started scoring from all positions, Bethania, Larson, Furst… On the other side players of Busto Ariszio were making a lot of mistakes. The score – 16:13, 18:13, 20:13 for Eczacibasi!

Despite Busto managed to improve the game from that moment, Eczacibasi is just too good team to drop that kind of advantage. It was all over after a service mistake by Ciara Michel – 25:20, 2-0 in sets for Eczacibasi!

And then the grand finale. The Turkish team was controlling the third set from the start to the end, mostly thanks to Bethania De La Cruz and Jordan Larson. The score was still close all the way until the finish of the set. Eczacibasi was up ahead by one point – 19:18, before making the crucial run. Bethania De La Cruz scored the next point for 20:18, Busto reduced to 20:19, then Gozde Yilmaz scored for 21:19, and finally Larson made a great spike for 22:19!

There was no coming back for the Italian team. Busto only managed to approach to 23:21, but Jordan Larson scored next two points and brought the European crown to Eczacibasi cupboard after many years of waiting!

It is also important to mention that Francesca Macron got injured in the last point, when she landed on the foot of Jordan Larson… She stayed lying on the floor, while players of Eczacibasi showed how great they are, as they stopped celebrating to check out if Marcon is OK. We will see in the following days how long Marcon will be sidelined.

CL W: Guidetti – “Thank you girls”; Cuccarini – “Could have been better”

TUR W: Galatasaray were good, but not...