Riley Salmon, Olympic champion with the U.S. team in Beijing 2008, was suspended for four years because of doping. 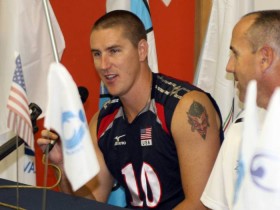 A 36-year-old receiver gave a positive doping sample of dimetilamilamin (substance similar to amphetamine that is used to burn fat in athletes and to decrease appetite) during the qualifying tournament for the Olympics in London 2012.

After that, the International Volleyball Federation (FIVB) initially sentenced him with only one year. At the same time, Salmon signed a declaration to quit on his competitive rights.

Later on, the World Anti-Doping Agency (WADA) appealed on the decision of the FIVB to the International Court of Sport (CAS) in Lausanne, which yesterday issued a decision to increase the sentence on four years.

The sentence will take effect until 27 September 2012. Most likely this will put volleyball career of an American to the end, because after disqualification is over in 2016, he will be 40 years old.

This is the second punishment for doping for Salmon, first one was in 2009 when he received 4 months of disqualification from the FIVB, having used medication for hypertension, which contained a banned substance hydrochlorothiazide.

A drug for hypertension, however, is approved by the FIVB, which later said that doping is not intentional and canceled the penalty.

WCHY W: All eyes on one game – Italy vs Brazil