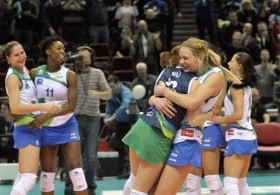 The hosts – as it was the case in all previous matches of the Champions League – started the first set with a line-up consisting mostly of foreign players, with libero Paulina Maj and young receiver Ewelina Sieczka being the only Poles on court. The opening set was very tight in the beginning as neither team gained real advantage in the score. However, right before the first mandatory stop Rabita BAKU managed to jump ahead 8:5, after Natalia Mammadova’s great services. Atom Trefl stayed slightly behind and kept trying to catch up with the rivals. But the 2011 world champions managed to maintain at least two points of margin throughout the set (12:10, then 19:16) and took it 25-22 by silvering their third set ball.

In the beginning of set 2 the hosts were the ones in control for a while, but the more experienced rivals tied the score at 5:5 and it was them who led 8:6 at the first technical time-out. Nevertheless, Atom Trefl was determined to win and BAKU’s head coach Zoran Gajic was forced to call a time-out after his team lost 4 points in a row (10:8 for SOPOT). Afterwards the game continued on a point-by-point basis. However, as Atom Trefl setter Alisha Glass changed her play a little bit, the hosts took control for the remainder of the set (25-22) and they were the ones celebrating the tie in the overall score (1:1). The hosts’ receiver Megan Hodge had an outstanding 73% spike efficiency in the set.

The third set was a display of Atom Trefl SOPOT power. Despite Rabita advantage at the first technical break (8:6), the hosts did not let the rivals jump ahead and managed to take the lead themselves (14:11, then 16:13). They stayed in control throughout the set increasing their advantage to 5 points (20:15) to finally wrap it up at 25-20 and take the lead in sets (2:1).

Set 4 started well for the guests as they quickly gained a four-point-advantage (8:4, then 10:6). Rabita BAKU stayed ahead, not letting the hosts get too close, despite their best efforts. It was not before the second mandatory stop that they regained some strength and managed to tie the score at 18:18. The end of the set was a live thriller – the play continued on a point-by-point basis but the hosts stayed concentrated. They eventually won the set 26-24 using their second match ball and the game 3:1.

“I have no idea of what happened today, why we played that well. We finally showed what we can. And we managed to take everything we could out of the last training sessions” said Atom Trefl SOPOT captain Izabela Belcik.

The rematch is scheduled for Thursday, February 9, in Baku.