Even though the traditional Montreux Volley Masters won’t take place this year, Switzerland’s Volleyball fans will anyway enjoy the opportunity to attend some high-class actions as the men’s national team will be playing a home match with Croatia this coming May 12 for the first round of the 2013 CEV Volleyball European Championship while in late June the ladies will make their home debut in the 2012 CEV Volleyball European League as they play host to Turkey, Bulgaria and France in Fribourg. 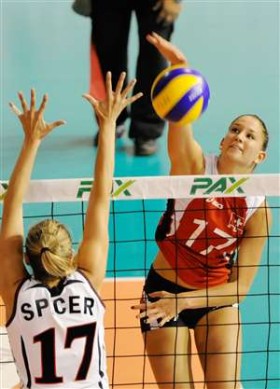 While the players are training hard under the guidance of head coach Svetlana Ilic, the local organizers in Fribourg are also working tirelessly to set up the right conditions for a splendid Volleyball weekend.

Tickets are being pre-sold via an ad-hoc website while an appealing advertising campaign is promoting that Volleyball festival there in western Switzerland. “We deliberately opted for Sandra Stocker, i.e. a player from this neighborhood, as the face of that promotional campaign whereby we hope to involve and attract as many fans as possible there in Fribourg also from the neighboring areas” says Reto Hähnlein, a member of the local organizing committee for the CEV Volleyball European League.

The national team will be having two training sessions a day in Zurich in the next weeks as well as some training matches. The players will be also enjoying some public appearances and join PR actions as they have embarked on a long-term campaign to promote the 2013 CEV Volleyball European Championship that Switzerland will co-host together with Germany.

“Since both our diagonal players, Mandy Wigger and Joana Winter, are injured, we will have to make a few changes to our plans” says head coach Svetlana Ilic. “Our goal for this year’s European League is to improve steadily, weekend after weekend, to get used to the rhythm of international matches and above all to impress the audience via the steady development of this group whose goal is to perform well at next year’s European Championship”.

Some young players will be added to the group already this year, like for instance Martina Halter – a middle blocker born in 1994 – who will be joining the preparations right from the start, while some more will join the team only once the European League is completed.

“This gradual integration is primarily meant to expand our pool of players and to get more options, and secondly to activate young players for the period that will follow the 2013 European Championship” says Stav Jacobi, General Manager of the Swiss national team.