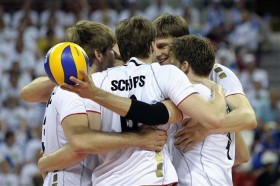 After yesterday’s close match against Pool II favorite Italy, the Finns entered the battle with Germany on a high note, also inspired by their large group of fans on the stands.

With some great serving, especially from Antti Siltala and Mikko Oivanen, they were able to control the beginning of the match and gained a 6-point advantage, also with the help of the many mistakes Germany made. But then the German block started working really well to prompt a dramatic ending of the set. The Germans survived four set-points for Finland and also missed to take advantage of two of their own to eventually emerge as winners at 31-29.

In the second set Vital Heynen’s team seemed to be the more motivated side. It managed to take the lead and kept it almost throughout the entire set. Finland fought back to stay in contention, and even took over the lead on the scoreboard briefly in the middle of the set. However, with some fresh spiking power by substitute opposite Jochen Schöps, Germany was the better team at the end of the set to manage a 25-19 win.

The German block continued to be a problem for Finland’s offense in the third set. Coach Heynen’s players accumulated a 4-point advantage at 10-6, but for Finland it was no time to give in. Olli Kunnari helped his team to get back into the set with good reception and prolific attacks. Four points in a row for the team of Daniel Castellani flipped the score to 21-18, after which nothing could stop the Finns from closing the set in their favor at 25-21.

The fourth set was completely dominated by the Germans. Finland made too many errors and was not able to stay in contention as the opponent piled up an 11-point advantage. Max Günthör’s serving also helped his team win this set. He scored 3 points directly from the serving line to eventually ace for the last point of the match.

Marcus Böhme from the German team and Mikko Oivanen from Finland topped the best scorers’ chart of the match with 18 points each.