Serbia cooled down Spain’s hopes to secure a semifinal spot at the 2012 Olympic Games - European Qualification for men in Sofia as it hammered out its first win in this tournament. The team mentored by Igor Kolakovic outplayed Fernando Munoz Benitez’s squad by 3:1 (25-19, 25-17, 23-25, 25-22). However, the one set that Spain managed to win may prove golden as now a 3:0 or 3:1 victory against already qualified Bulgaria tomorrow will secure a place among the top four of this qualification. 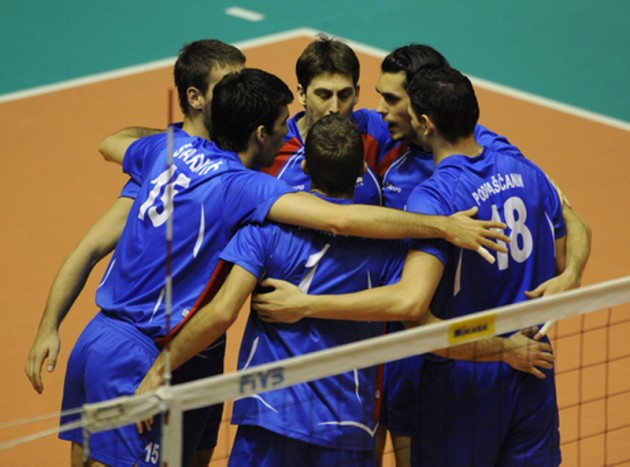 The first set started pretty even as the gap never exceeded 2 points through the second technical time-out. A series of 6 consecutive points with Vlado Petkovic behind the serving line brought the score to 19-14 to give Serbia the edge it needed to win the set. The story of the second set was somewhat similar, only this time Petkovic made his contribution by serving for 5 points in a row earlier – after the first time-out. Although Spain greatly reduced its unforced mistakes, Mihajlo Mitic’s spikes were practically unstoppable and Serbia was able to close the set at an impressive 25-17.

Spain greatly improved its performance in attack and took over the initiative in the third set.  Iban Perez and Manuel Sevillano were Fernando Munoz Benitez’s top guns in this set as Spain built up a 5-point lead.  Serbia’s serving resulted in 4 aces in this set and helped the Blues come back in the score and even take the lead for a moment during the second technical time-out.  However, Spain was quick to recapture its advantage to eventually win the set at 25-23 with a successful hit by Perez for the last point.

In the fourth set Spain was already looking for a complete turnaround and after it took the lead at 6-5 it was able to maintain a 2 to 3-point gap for a while with Sevillano at 100% in attack and with an ace hanging from his belt. Unfortunately for Spain, at 12-10 an unpleasant injury prompted Sevillano’s replacement and the team’s spirit suddenly dropped. The Serbs took advantage of this and quickly flipped the score to 18-14 in their favor.  They also sustained an injury and an exceptional substitution was allowed to let Milos Nikic out of the court. But it was too late into the set to let Spain regain its confidence from this new balance of power. A powerful blast by Dragan Stankovic closed the set at 25-22 and gave Serbia the victory.

Aleksandar Atanasijevic became the best scorer of the match by adding 21 points to his tally, closely followed by teammate Milos Nikic with 19.  Iban Perez scored 18 points and became Spain’s most prolific player.