National team of Italy returned early this morning from Sofia where they won the Olympic qualifying tournament. They will have two days of rest before going to Florence and preparing for the debut in the World League. 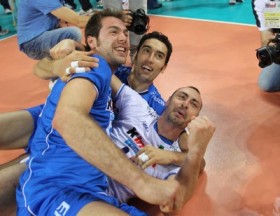 Andrea Bari: “This is a great result in my career, it was a hard journey every step of the way. We were second in the European Championship, then third in the World cup, and finally we won this tournament and qualified for the Olympics. But now we have to train hard and earn a place among the twelve players who are going to London. We have to show that our coach Mauro Berruto made a good decision.”

Emanuele Birarelli: “This result is a great satisfaction to me. I have played in the 2008 Beijing Olympics and I know what honor it is to play in such a manifestation.”

“I wish I played more in Sofia but I knew that we had two great players Fei and Mastrangelo who played. So I just tried to help my team by training hard and offering our coach an alternative. It’s a great feeling to be a part of this team and in the Olympics I will gladly accept any role” he added.

ITA A1: The end of the contract between the Vibo Valentia and Nikolov