After losing in straight sets some weeks ago the away match played in Azerbaijan, Dinamo MOSCOW ended tonight the winning streak of rookie Lokomotiv BAKU storming back from two sets down to score a home win. This and other volleyball news read on Worldofvolley.com. 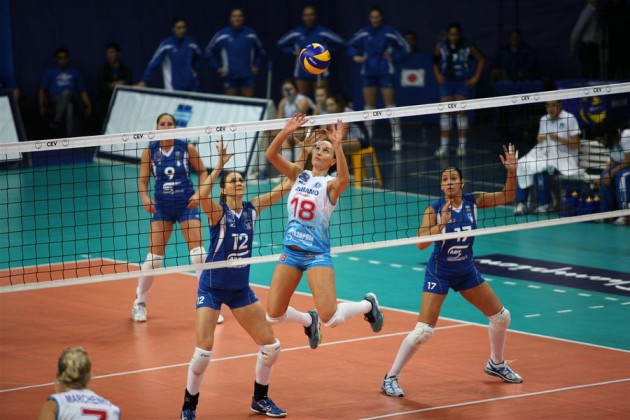 Lokomotiv tops the charts there with 11 and even third-placed Bank BPS Fakro MUSZYNA (8) remains in contention for a spot in the Playoffs 12 to be assigned next week.

Lokomotiv caught a very good start tonight and even though the hosts looked confident and played calmly, still it was BAKU to claim the opening set (22-25). Things did not change also in set 2 even though Dinamo head coach Svetlana Ilic had opted for some changes in her starting six (21-25). As they were struggling, especially with their offensive play, the Muscovites could not stop the run of Lokomotiv that was paced by Aneta Havlickova and Corina Ssuschke-Voigt, with Ukrainian-born Tatiana Artmenko sealing the last point of the second set.

Still Dinamo woke up in the third set with Natalya Obmochaeva and Natasa Osmokrovic finally able to unleash their real potential, going for a massive 25-14. Lokomotiv got back on track in the early phases of the fourth set but Dinamo remained focused and eventually called for the tie-break after a relatively close final rush (25-22). There Dinamo played extremely well and the final 15-12 was a good way to pay back the great efforts of the local heroines who had stormed back after a poor start.

Czech Aneta Havlickova who top scored in the game with 27 points for Lokomotiv said: “We played really well in the first two sets but then we somehow got stuck. I do not know why but we really lost our rhythm and started making mistakes. We have some problems in our team but this is not an excuse for losing the game in such a bad way”.

“It was a very difficult match for us; it wasn’t just about Volleyball, but also about the psychological approach to the game” stresses Dinamo mentor Svetlana Ilic. “We stayed focused and we claimed a very important win in the end. We finally found our best game and are evidently happy with the result”.

POL M: Piotr Gruszka – I welcome the determination of the boys