Serbian national team players work hard to get ready for the Grand Prix and they had the need to share it with the fans. In the image are Jovana Brakočević, Nataša Krsmanović, Silvija Popović, Suzana Ćebić, Jasna Majstorović, Maja Ognjenović. 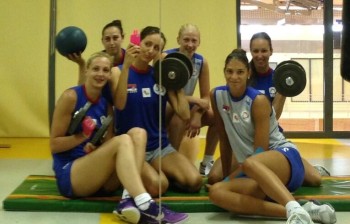 Six of them on Twitter published a picture on which they pose with the requisites that they are using during their training sessions in the gym.

Although their smiling faces do not show any trace of exhaustion due to grueling preparations in Kranjska Gora, Slovenia, a comment that follows the photo speaks for itself: “We are working, creating, struggling …”

In the image, in addition to Jovana Brakočević officially the best player of the final tournament of the Champions League last season, are middle blocker Nataša Krsmanović, liberos Silvija Popović, Suzana Ćebić and Jasna Majstorović, and also the setter Maja Ognjenović.

To read more articles like this, check out our Did you know? section.