After the World Grand Prix, the national team of Germany now can fully concentrate at the preparation for European Championship on Germany and Switzerland (September 6-14), but also in Schwerin, preparations are in full swing. 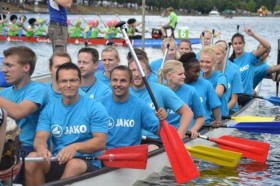 Schweriner players and coaches tried themselves in paddling

Working behind the backstage in the “Sports and Congress Hall”, the players of Schweriner SC helped to inspire as many spectators as possible to come to the matches which will be held in that city from September 6 to September 8.

To animate the sports-loving audience, the German champions and Cup winners also paddled at the “22nd Dragon Boat Festival” on Schwerin lake and informed the audience about the next upcoming volleyball competition.

SSC fought with 5 more teams for the “Craft Champion Cup”. Players and coaches of Schweriner had a lot of fun at this event.

Tanja Joachim and Lousi Souza Ziegler took advantage to stimulate interest of the audience for the European Championship by visiting Kühlungsbornb where was the last station of the Smart Beach Tour before the finals will be held in Timmendorfer beach in late August.

Both of the players appeared on “Centre Court”, and of course followed the games where the women’s world number 2 Holtwick / Semmler and men’s duo Dollinger / Windscheif competed.

For more similar stories, click on Did You Know?

PHOTOS OF THE DAY: Serious face vs....