The oldest volleyball player has 98 years

The Optimists is the title of a movie released last year in Norway that recounts the story of a group of Volleyball ladies between 66 and 98 years of age from the town of Hamar. The Optimists won the Ray of Sunshine award at the 2013 Norwegian Film Festival and is an exceptionally humane and heart-warming film. 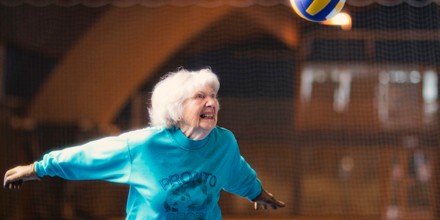 Despite their weekly training sessions the Volleyball ladies known as “The Optimists” have not played a match for 30 years. Now this is exactly the plan. But against whom? Rumours say there is a group of handsome Swedish gentlemen across the border. Goro (98) is the queen of the team with her willpower, joy of life and pink Converse shoes.

“Many of us fear age. Maybe these Volleyball playing ladies will change our ideas” say the producers. “Goro is the incarnation of the team’s philosophy of life. But the challenges of old age also affect her. Loneliness and yearning often knock on her door. On those occasions, it’s imperative to fight her way through the challenges and set new goals.”
The film follows Goro and the team – in everyday life and on the court – from when they decide to play one last game, through their preparations, and until the game finally takes place.

Film Director Gunhild Westhagen Magnor won the Ray of Sunshine statuette at the 2013 Norwegian Film Festival for this heart-warming documentary. “We were never in doubt that this film was an obvious winner”, the jury members wrote and followed up with: “It gives us the belief that spirit, courage and a big helping of self-irony will make life much better. This is a film where the audience laugh, smile and cry, so: a real Ray of Sunshine.”

What do you think about this old lady? Write on WoVForum.

RUS M: Alekno “We have to keep our feet on ground”