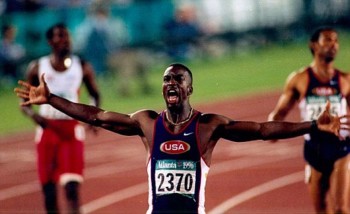 During his 11-year career in athletics (200 and 400 meters sprint), Michael established a record with 13 Olympic and World Championship medals, all of them gold.

Johnson was noted for his unique running style. His stiff upright stance and very short steps defied the conventional wisdom that a high knee lift was essential for maximum speed.

After his retirement in 2001, Michael started “Michael Johnson Performance“ at McKinney, Texas. It is the training facility, established in 2007, for youth athletes aged 10 to 18 and professional athletes in all sports, opened to help train other athletes to reach their full potential using the same training philosophy and training techniques he used to achieve success.

Johnson also works as a television commentator, often for the “BBC“ in the United Kingdom, where he also writes a column for the “Daily Telegraph“.

Johnson was elected to the United States Track and Field Hall of Fame in 2004, where his 200 m performance at the 1996 Olympics was named the greatest track and field moment of the last 25 years.

He became known as the Fastest Man in the World in 1996 when completing the historic 200/400 meter Olympic double recording. He recorded the fastest time ever clocked by a human, running 23 mph en route to his 200 world record performance. His record on 400 meters from Sevilla 1999 (43.18) is still unbeaten.

Check out our Did you know? section, every Friday a new story! Tomorrow read about women volleyball superstars who haven’t signed for any club yet.