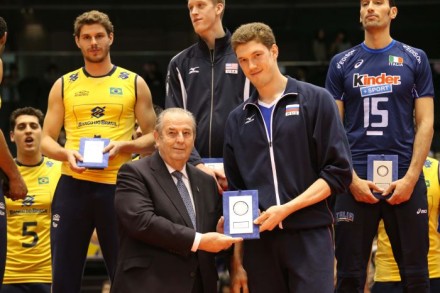 After five games of the World Grand Champions Cup, your 75.7 percent of attacks – 50 out of 66 are simply amazing! Is your bond with setters key to success?

”That and more. I was in an amazing form. But Makarov and Grankin are my longtime teammates and we understand each other perfectly.”

Since Olympic games in London you won every single competiton you played in, now you ended up second, how you feel about it?

”We won four games out of five, while wining versus the Brazil team third time this year. And even though we didn’t won the championship it’s a great way to start a campaign before the World Championship 2014.”

The tournament you were the center of attention of the Japanese press, were you able to handle it?

”Our team is specific. Every player we have is a superstar and it’s common for me to be that much in the center of attention, but it’s ok I like it, nothing wrong with being popular.”

CL W: Eczacibasi and RC CANNES to prolong their rivalry