About semifinal series with the "Iskra" Odintsovo , the upcoming final against "Zenit" and the system of video replays - in interview with the middleblocker of the"Dinamo" from Moscow , David Lee. 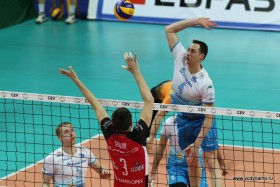 – Two home matches of the semifinal series were very different in the game of “Dinamo”. Why?

– The first home game looked like we were not ready to fight. The second game has developed differently. We won. If we lost a game today, the series would be moved to Odintsovo, and the matches would be very difficult.

– “Dinamo” was tired after the CEV Cup finals?

– It is possible that after winning the CEV Cup, we relaxed a bit and in the first home game against the “Iskra” , we did not have that pressure, as in the final. We didn’t play at full strength, so we lost. Yesterday we played well and won. The reason for the defeat in the third game, was tired of the whole team I think.

– Will it be possible to recover for a short time and prepare for the final against “Zenit”?

– I think so. We have enough time to recover physically and psychologically, to relax after the CEV Cup and the semi-finals with a “Iskra”. I believe that we can come up in normal condition to the final.

– In home games, in the semi-finals of “Dinamo” – “Iskra” Volleyball Federation of Russia decided to use a system of video replays, called “hawk eye”. What do you think about that?

– I approve this innovation. We may recall last year’s quarterfinal match between “Yaroslavich” and “Zenit” when Poltavski in the opinion of the judges,  missed the court. If there was “hawk – eye”, the semi-finals pairs would be different. I think that such a system will improve the quality of the game, and will help in resolving issues in the match.

– How do you assess the chances of “Dinamo” in the fight for the gold with the strongest club in Europe at the moment, “Zenit” Kazan ?

– “Zenit”, perhaps the strongest club in the world. It will be very difficult. At each position “Zenit” have strong players, they have no weaknesses, plus they have a long “bench”. They can play with a full second team, as we have only 7-8 players in the team, which can play in the first six. So, with Kazan we will fight very hard.

– I think the key will be on the serve and the reception. If we will complicate their reception, they will not be able to fully use first rate. And, if we play well at the reception, we have a very good setter Sergei Grankin who have quickly passes, and it can complicate the game for Kazan.