FIVB officially announced that Trentino Volley will be regularly at the start of the World Cup 2013, this time...

LAUSANNE – FIVB officially announced that Trentino Volley will be regularly at the start of the World Cup 2013, this time not in Qatar but in Brazil between 15 and 20 Octoberhe  the .

The Italian club will defend the four world titles won consecutively between 2009 and 2012 thanks to the wild card granted by the FIVB. 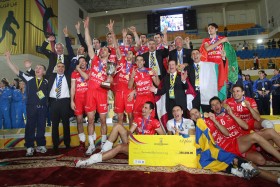 The team of Radostin Stoytchev will participate in the tournament for the fifth time in a row (the only team to be present since the competition is back in the calendar of the International Federation).

In addition to Trentino Volley, the list of the eight teams that will participate in the tournament already confirmed the presence of African champions of Sfax (Tunisia), the European champions Lokomotiv Novosibirsk (Russia), the champions of Asia Kalleh (Iran).

The names of the last four teams will be defined in the next three months, one of these will represent North America and will be arbitrarily chosen by NORCECA, the other three will be South American, two Brazilian clubs and the winner of the continental tournament to be held in Belo Horizonte between 8 and 12 May.

Unchanged the formula of the event: the eight teams will play the first phase divided into two groups of four, with the top two in each group (which will be played with the formula of the Round Robin between 15 and 18 October) will advance to the semi-finals and final, scheduled between October 19 and 20.

The draw of the two Pool of the first phase will be carried out in the coming months in Brazil.

ITA M: Linkem Cup A1 final Back in Trento for game 3

WoV in Milano: Worldomania in Mediolanum