A Level II Coaches Course is currently underway in the Democratic Republic of Congo under the leadership of Course Director, Andre Glaive. The course which started on August 5th will run until August 17th. 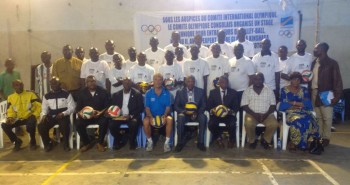 The purpose of the course is to give participants the tools to better train Congolese youth in the basics of volleyball.

Of the 21 candidates and two observers attending the course, 17 are from the Democratic Republic of Congo and four from Congo Brazzaville.

The theoretical and practical components of the course will take place at the College Boboto in Kinshasa.

The opening ceremony was conducted in the presence of a large number of members of the National Olympic Committee, the National Volleyball Federation and journalists.

This is the first time the federation is holding a Level II Coaches Course. The course began with the history of volleyball, which included video extracts of the World Championships in 1956, 1986, 2010, in order to give participants some sense of the changing rules.

The course also looks closely at ways in which coaches can motivate players and enhance their confidence through the practice of the sport. Other subjects that will also be discussed are offensive organisation, defense, transition games, different styles of play and the physical preparation of players.

The Level II coaches course, offered through the Volleyball Cooperation Programme (VCP) in conjunction with Olympic Solidarity, endeavours to increase the volleyball skills and knowledge of coaches around the world.

By Mark Lebedew: Use Your Magic Eye