Cairo, Egypt, February 16, 2012 – The CAVB Board of Administration are set to meet for the first time since last year’s elections at the CAVB Congress on Friday and Saturday. 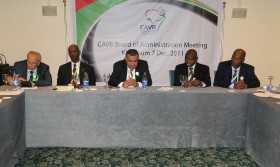 The board will outline their strategy for African Volleyball for the coming two years with the calendar of events for both volleyball and beach volleyball as the main item on the agenda.

CAVB will organize six volleyball competitions in 2012, namely the men’s and women’s African Club Championships in April and the four age group African Nations Championships; junior men and women, and youth boys’ and girls’ in August and September.

The main focus for beach volleyball will be the finals of the CAVB Beach Volleyball Continental Cup in June, one of the qualifying events for the London 2012 Olympic Games.

The list of proposed CAVB Coaches, Referees and Management courses will also be discussed.

Each of the seven zones will present their planned activities for 2012 as well as the competitions they will organise for qualification to the continental championships.

The board will also approve the new CAVB commissions which will remain in place until the 2015 CAVB elections.

“It will be a very proactive meeting for our board because we carry the dreams of African volleyball in the future,” FIVB executive vice-president and CAVB president Dr Amr Elwani said.

“We will assign jobs for all board member so that decisions can come in a democratic way because it will be the sum of all the board opinions. One of the main items to be discussed is to continue the development plan that began with great success last year.”

GER M: NETZHOPPERS KW: Only one error in fourth set

Unacceptable – do not practice with kids...