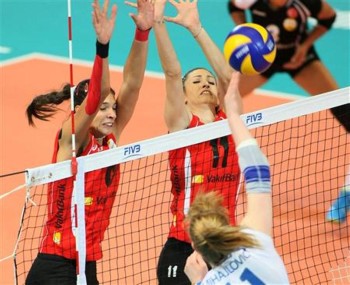 During this time the wing spiker won two times the Swiss League and three times the Swiss Cup. A month ago, Mihajlovic was looking forward to a spectacular comeback in Switzerland as the 2013 CEV Volleyball European Championship playoff round took place in Zurich. However, Brankica Mihajlovic got injured in a pool match and had to watch the games from the bench. “It was quite hard to rest at that moment. The deception was huge after hearing that I had to take a break”, Mihajlovic said. Nevertheless, the 21-year young globetrotter hadn’t to wait too long. With Unilever Volei from Brazil, her new club, the wing spiker quickly returned to her beloved city in Switzerland.

Brankica Mihajlovic, who was a former member of the junior national team of Bosnia and Herzegovina, received the permission for playing for Serbia and rapidly became one of the biggest talents in Europe’s volleyball. In her young career, Mihajlovic has already played for five different teams in Europe, Asia and now South America. “I’m still young and want to get more experience. I’ve learned a lot by those changes. The year in South Korea was amazing as there were big differences to my life in Europe.”

The wish to get more experience was also the reason why the Serbian national player decided to go the unusual way from Europe to South America: “I want to improve. As Bernardo Rocha de Rezende is one of the best coaches in the world, it was a big chance for me.” Brankica Mihajlovic moved to Rio de Janeiro, an exciting adventure for the young player. But there wasn’t a lot of time for the 1.84 m tall player to become acclimatized in the samba city: “I arrived in Rio one week ago and immediately returned to Europe for the Club World Champs. I know it’s early, but I already feel at home. My teammates treat me very well and help me a lot.”

Strong will to win

Coming back after an injury is hard. However, Brankica is confident that the injury on her elbow won’t be a problem for the next games: “It doesn’t hurt anymore and I can play without any handicap.” As the ambitious young wing spiker feels ready for new challenges, she has set herself a target: “We haven’t talked about our goals as team. However, I always want to win. As I had to sit on the bench during the European Championship, I’m hungry for victories.” The first chance for her aim comes on Saturday at 18.00 local time with the 2013 FIVB Women’s Club World Championship semi-final match opposing Unilever Volei and … Volero Zurich!