The second phase of the FIVB World Grand Champions Cup will get under way on Friday and the six coaches attended a press conference at the team hotel in Tokyo on Thursday. In Friday’s matches, Brazil will play the Dominican Republic, USA will face Russia and Japan will take on Thailand. 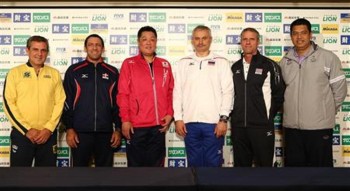 Karch Kiraly: I think in our match with Brazil neither team was at a very high level of play but that wasn’t surprising as we’re just reassembling and getting back together for this event. We corrected some things and had a better performance against Japan. We love playing both those teams – the Olympic gold medallists and the Olympic bronze medallists. It’s always a great battle and an honour when we step on the court with those two programmes. Now, we look forward to more battles starting tomorrow with Russia, also a legendary force in volleyball. One of the beauties of women’s international volleyball is we have many varying styles. There’s much more difference than there is on the men’s side of the game and so it’s great for us as coaches and athletes to adjust from match to match to these different styles.

Brazil coach Jose Roberto Guimaraes: I agree with Karch that we have many schools [of volleyball] here. You have to adjust every time and change every day. Now we have three hard matches. Every time we play the Dominican Republic it’s difficult. They have a very good attack and are growing up every day, every month, every year. It will be a hard match and after that we will have Russia and Japan, which are also two difficult matches. It’s important for the team to be in good condition and to do our best in these last three matches so we can finish in the best way in this tournament.

Thailand coach Kiattipong Radchatagriengkai: In our first two games we were not successful, but I am satisfied with the players, who tried their best. But we learned a lot of things from our matches against Brazil and the Dominican Republic, and we are learning from our mistakes. Now we have to focus on our next three games, against Japan, Russia and USA. All of them are very good teams and I hope we can do better than the last two games. We love to enjoy our volleyball every time we play and we try to do our best on every ball.

Dominican Republic coach Marcos Kwiek: We are happy to be here in Tokyo. In our first matches, we played against Thailand and Russia, two very different teams, but were able to get three points. Against Thailand, we were able to play our own game and could play with good speed, but against Russia we came up against strong blocking and couldn’t play our game. From here on, we have three very tough matches against Brazil, USA and Japan – the top three teams in the world at the moment – so we need to fix the issues we have and try to do our best.

Japan coach Masayoshi Manabe: In the last two days, we beat Russia and lost to USA – two very tall teams – and we learned a lot. From now on, we will be up against Thailand, the Dominican Republic and Brazil. They’re all strong teams but we want to play our game and try to raise our performance level.

Russia coach Iury Marichev: First, I’m happy to be here in this spectacular competition. I suppose the Japan fans were happy with the first match that we were unable to win. At the moment, my team has serious issues. We’re missing two key players but have been boosted by having (Liubov) Shashkova and (Evgeniya) Startseva in the team and that has helped us perform better than before. In the match against Japan, the players couldn’t communicate well but we fixed things against the Dominican Republic. We want to play better by having better communication between the players.

ITA M: Kovač – “It was a good performance, and with a bit of luck…”