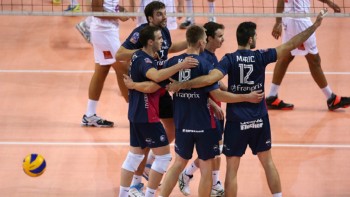 French squad had one point more than their rivals before this game. But, started like they need only win in Montenegro. Paris took first two sets and was marching towards repatition of a result from last week. However, Budvanska rivijera had an answer. Home team won third set with power, and than managed to seize the fourth as well, despite letting Paris equalise from 24-22 to 24-24. But, there was not enough strenght  for a total turnaround. French club took 8-5 lead in tie-break and kept three point lead untill the end.

CRO: HAOK Mladost on the top of...