Lodz, Poland, March 16, 2012. The so-called “challenge system” – which is about to be tested in combination with this year’s final four in Lodz – was given much attention by all coaches and players of the participating teams as this afternoon they got together with many media at “Atlas Arena” to share their feelings and expectations with some 24 hours to go before the start of what is unanimously seen as the Volleyball event of the year. 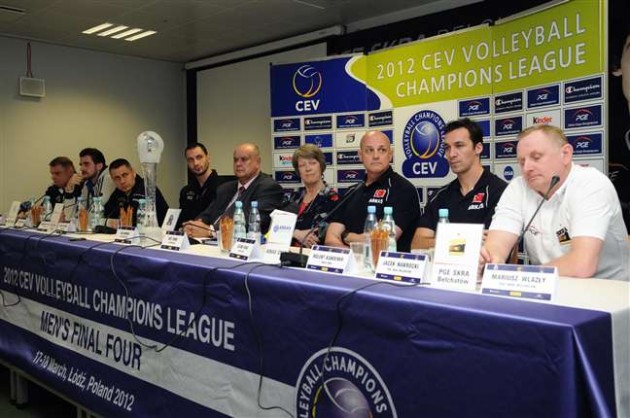 “I still do not want to express any opinion about the system” said Radostin Stoytchev, the head coach of TRENTINO PlanetWin365, “as long as we do not have seen it fully operational. This is certainly something totally new for our sport which can only help draw additional attention but I feel like our primary goal remains to deliver a great performance also to delight the great fans that will be as usual in attendance here in Lodz. It still feels great to have joined the top teams in Europe for the fourth consecutive time” adds the Bulgarian-born mentor of the defending champions.

Alexander Volkov, the captain of Zenit KAZAN, i.e. last year’s runner-up that this time will be challenging TRENTINO in the semifinals, was more confident about the pros resulting from the adoption of this technology: “I think this system could be a great benefit, as all players will be more relaxed and not too concerned about the decisions of the referees, as you have the chance to check them out if you feel that they made a mistake. This will cool down the atmosphere on the court and we’ll be able to concentrate on the game rather than on other external factors”.

His view is shared also by head coach Vladimir Alekno, who stressed out the importance of a technology that can only help the development of Volleyball also in the near future.

The system is already well-known in Poland as it was initially implemented for last year’s finals of the national cup as well as for the Playoffs of the PlusLiga, before this season it was practically put into place for all matches of Poland’s first division.

In this sense, the local heroes of PGE Skra BELCHATOW are already pretty familiar with this tool whereby the captains can challenge, twice per set, the decision of the referees when it comes to ball in or out, net violations and some more cases.

“Even though the system is already operational since some time here in Poland, still it is contributing quite many emotions and discussions as those that are operating the technology are sometimes not yet experienced enough. However, for this final four we have some of the best referees of the world, all people have been trained and it can only be an additional help to a deliver great show” stresses head coach Jacek Nawrocki.

“As for the semifinal with Arkas, I think we shall be very careful as this team has qualified for the final four by beating first our archrivals in the national league, Zaksa KEDZIERZYN-KOZLE, and afterwards a strong side like Russia’s Lokomotiv NOVOSIBIRSK”.

Arkas is indeed one of the major sensations of this season being the very first men’s club from Turkey in history that has qualified to the last and deciding act of Europe’s most elitist competition. “We are ready to cause another surprise” says team captain Bülent Kandemir. “I think we are, among the participating teams, the side with less pressure on our shoulders and so we can play even better” he adds.

“We have been preparing normally, as we always do for all our matches, and as far as the challenge system is concerned, anything that can help improve the image of our sport is absolutely welcome” singles out Canadian-born head coach Glenn Hoag, who still has good memories from the 2010 finals where he was heading Slovenia’s ACH Volley BLED.

With PGE Skra opening the program of the semifinals on Saturday at 14:30 (local time) against Arkas, the “Atlas Arena” will welcome some 12’500 supporters that will first have the opportunity to enjoy a special fan zone that the organizers have set up right next to the hall. Some 3 hours later, Italy’s TRENTINO PlanetWin365 will try to extend its European dominance by taking on Russia’s giant Zenit KAZAN. “We will do our best to prolong our streak and especially also to deliver a great Volleyball show” says Matey Kaziyski. “As for the challenge, you know, I have never seen it, but I guess it will be a very interesting experience for all of us, referees, players and coaches. I know how it works in tennis, for instance, but I am really curious to test it out here in Lodz”.

This final four is enjoying an impressive attention by the media, with more than 100 countries that are going to broadcast the matches – live or delayed – plus the usual live streaming, with English commentary, being provided by LAOLA1.tv likely to spread images of the matches on a worldwide scale. Do not forget also to check the live gallery provided by eventoLive which will be available here and whereby photos will be continuously uploaded as the actions unfold at “Atlas Arena”.

Additional flavor is contributed by the two spots that will be at stake – for the winners and runner-ups – to represent Europe at the FIVB Club World Championship scheduled for next October in Doha, Qatar, as confirmed this afternoon by CEV Vice President Jan Hronek.

BUL M: Another attempt of Placi to...