Alekno (Kazan): "Today is not the best time to talk about this game.So, tomorrow I will express everything. The Challenge system has helped us, because it was not only crucial in solving some actions for Kazan, but because its implementation has helped the players control their emotions." 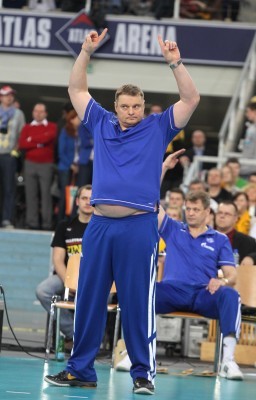 Stoytchev (Trento): “First, I congratulate to Kazan, it has deservedly won the game. It was only a matter of time before a team could beat us in the Champions League and it happened today unfortunately. Obviously, I am disappointed with the defeat, but life goes on.
The game we lost in the second part of the third set  when we have not recognized important moments.

From 21:20 for them, we lost three or four occasions and the set finished in their favor. Against the team like Zenith, If you do not play properly or the best you can and do not recognize the crucial moments, the result is undoubtedly negative.
I also think that the challenge system had a positive impact on players and coaches, at least as a way to control the nervousness on the court. In fact, I have not understood it very well, because I have not figured out exactly how it works: it takes time and experience, but it is certainly helpful for volleyball and will be in the future. “

Stoytchev about Osmany Juantorena in the semifinals: “The only thing I can say is that we have come here to play as a team and if we lose, we lose as a team. I do not want to discuss the topic about Juntorena. He was my player for three years and now will play in another team. However, to me it is only important how we play as a team now.”

CEV CUP M: MONZA is not afraid of away match in Moscow