The countdown has started in Bursa where on Wednesday the home heroines of Turkey will play Germany’s national team for the first of two final matches where the title of the 2014 CEV Volleyball European League – Women will be at stake. 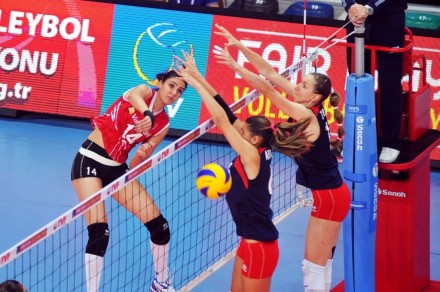 This year’s Finals will be an opportunity for young, up-and-coming players to shine. They will also turn into a very exciting confrontation opposing the respective head coaches, since Turkey’s mentor Ferhat Akbas is Guidetti’s assistant at VakifBank ISTANBUL. After joining forces for the start of the 2012/2013 season, Guidetti and Akbas drove VakifBank to an unprecedented winning streak of 73 consecutive matches, thereby winning the 2013 edition of the CEV Volleyball Champions League, the 2013 FIVB Women’s Club World Championship, as well as the 2013 edition of Turkey’s national league, national cup and Supercup. Though Akbas and Guidetti are close friends, this time around they will be standing on two different sides of the net, both hoping to steer their respective team to European League gold and to qualification for the 2015 edition of the FIVB Volleyball World Grand Prix.