written by WoV May 9, 2012 source: volleycountry.com

Plataneros de Corozal announced that the team reached an agreement with Canadian opposite Dallas Soonias to play in Puerto Rico's PRO League for the upcoming 2012-2013 season which begins next August. 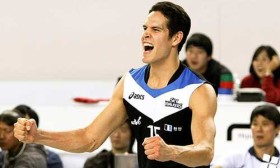 The Canadian is a strong 201 cm opposite and he is barely 28 years old.

The Puertorrican team announced recently the signing of the international setter Fernando Morales. Plataneros have serious intentions of winning the title in this new season, that’s why they signed one of the best opposites in all the American continent.

Dallas Soonias just finished his season in the Korean League which is considered as the top Asian league, in Korea he obtained the MVP award for the second part of the regular season, he also finished as the second best scorer of the tournament.

The Canadian has an incredible resume that includes participation in some of the best leagues of the world like the leagues of Poland, France, Spain, Korea and Russia.

Dallas has been a key component for the Canadian national team since 2004, actually he averaged 20+ points per game in each game he played as a starter for his team. He is an excellent attacker and blocker with a very consistent jump serve, those are the tools that Plataneros hope to use in order to win Puerto Rico‘s 2012-2013 championship.