WoV Blog: After the finals…

One of the best championships for volleyball has finished yesterday. After 14 long years, team from Emilia-Romagnia region claimed the SuperLega trophy as the best team in Italy. DHL Italy must be very proud of supporting Modena's stars in this season. 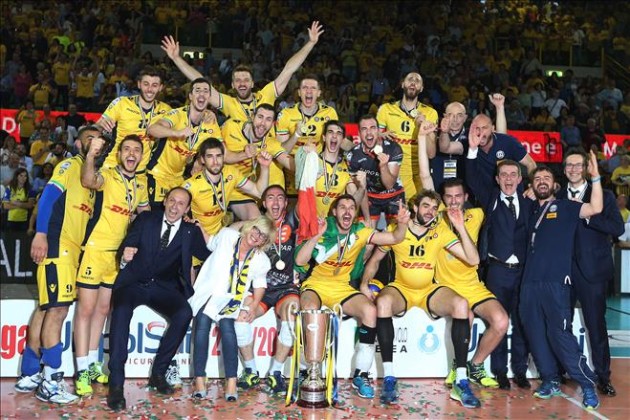 What happened on the court yesterday remains written in the history. During the whole season the team orchestrated by one of the best (like Italian newspapers describe him) italian coaches and president of AIAPAV (Assiciazione Italiana Allenatori di Pallavolo) Angelo Lorenzetti managed to overcome all the difficulties they have faced. Nemanja Petrić‘s injury, Matteo Piano‘s backpain followed by medical intervention, loosing CEV Champions League Best12 Round against Halkbank ANKARA were only some of the things that happened during the previous season. He prepared the team to resist, to suffer, to play… And they won. All the important games they won. All the important trophies this year.

Is there a better way than this for Bruno and Lucao to prepare for Rio2016 Olympic Games at home country? Real modern duo setter-middle blocker pushed in every game even when they were not in a mood (and that also happened during this season). Both showed that Brazil’s coach Rezende can count on them in difficult moments.

Cameroon-origin player from France… Controversial, unpredictable, difficult to control, etc. Many words were used this year about his behavior in and out of the court. But one thing he showed: he can be the one to decide, the one to change, the real MVP. And not only MVP of the final game, but the whole championship. 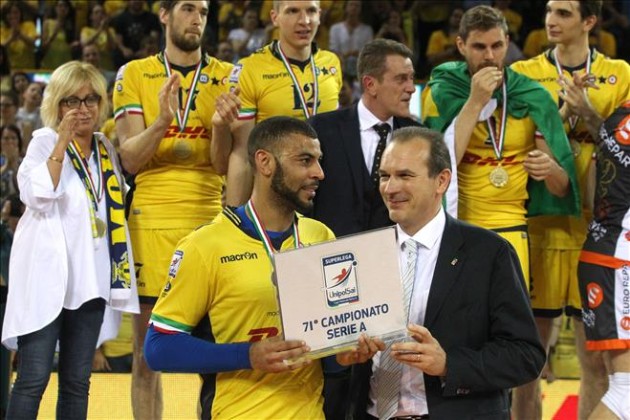 Sir Safety Conad PERUGIA? They did their best. Maybe they celebrated a little bit too much after the semifinals against Cucine Lube Banca Marche CIVITANOVA in regard to DHL MODENA Volley. Singing and celebration were supposed to wait for the last point of the last game.

Aleksandar Atanasijević, the Serbian bomber, was scoring 20+ points every game. Was it enough? Unfortunately no. He desperately needed help from somebody from his team. Middle blockers excluded. Slobodan Kovač changed a lot after substituting Daniel Castellani by putting USA National Team Aaron Joseph Russell to play in starting roster. Russell showed why he can be trusted for the difficult games but also paid a little due to lack of experience. In his age this could be accepted thinking of the future.

SIR Safety Perugia will have to learn from their mistakes which they made this season. And Modena Volley? Voices started already to speak about changes. But let them celebrate. They deserved it. They WON!

yeah. modena championship experience is their advantage against perugia, cause perugia is leads by 4 points during that 5th set but they just mentally collapse dececco just setting without knowing if they can score or not. when modena tie the score they are just pressured. and kovac knew what aaron russell is capable off when he is on fire he is unstoppable and you can rely on him during some difficult moment the only thing its just he still adjusting to dececco sets, he is used to micah sets FAST and on the height that he wanted. i think thats they need to work on this season.

I believe russell would be as great as stanley and anderson. From his jump serve then switched to jump float, now undeniable has one of the strongest jump service that can run aces and points. If he decide to team up with lube, definitetly would be awesome..

@Jjj if russell transfer to lube and micah knew what kind of set he wants, cause de cecco always give him slow and low sets but that pipe combination play de cecco master it for russell

Rado Stoychev can take a Modena !!! This is next Champions league champion

@Amazing Of course, if the team stays together. But Rezende is leaving and also Lucao..

@Angelo Why? Thay will also withdraw? This is very bad for CEV and the whole organization of teams continue to withdraw and don’t play international club games. Volleyball in Europe will use too much! I personally hope CEV will find solution. At least to cover expences to the best team so they play and promote volleyball and don’t have any loss..

@dee jae69 Sponsors invest because they have simething in return not only because they like volleyball. Also clubs, they compete because they want somethibg back. Time of glory is behind us, everything now and sport also is and have to be pure investment. Many sponsors are local or regional companies. Only few teams have international sponsors who can direct marketing money through some volleyball club who travels around Europe to play and get visibility. But that’s not enough. Ex. handball EL has budget of almost 10M. Why not make something with volleyball? Like WL, pay money for particiption and if you pass first round you get your money back plus bonuses for every next round…

@Axe yeah true not enough tho. yeah this is the thing about FIVB the first place in world league 1M FIVB should pay the tax of the 1st place winner. and funny thing about FIVB and CEV, players spend 6 to 8months on their clubs can you imagine if CEV pay a 1M for CEV CHAMPIONS league WINNER, 500thou for 2nd place and 200 for 3rd place at least it helps the club finances and FIVB World Club Championship they only pay only 200thou for first place, imagine that for example the club finances with plane tickets, hotels, coaches and stuff to travel in brazil and you will only get 200thou its like when they got back ok we won 3rd place we just only get 75thou well at least it pays the expenses lol. i think FIVB should have more games for clubs and prizes alot of clubs suffering financial problems like in poland lotos and cuprin will not participate on CEV CUP they want to focus on their league and also to cut expenses, and look at DHL modena they have this crowd funding just to keep their players imagine they let bruno go just like that so it means they really can’t pay bruno, even bruno lower his contract fee. just sad they won 3 titles and they can’t keep their roster just WOW

@dee jae69 Modena is not making this because DHL is leaving and they don’t have money. They have money that is sure. I think they use this moment when they win to get as much money as they can. That’s why they make this quick-running crowdfunding until the end of this month. In many clubs works like that: let’s collect money frim sponsors and the rest will cover the main sponsor (generally the owner of the club). It always work like that. Other matter: FIVB cannot organize any more club competition beside Club World Championship. All other cometitions depend on continental confederations. It’s like that for CEV also. CEV should make the same thing un Europe: collect money from clubs who want to participate (let’s say who are willing to bet) make them play and after first round if your team go to next round you get sure money you invested. If you don’t go, you get 60% or 70% of the money. All the prises you get after 1 year so CEV with good management could get 20% more on that money. There they can find money to pay 500k, 350k and 250k for first 3 places. And you’ll see that only strong teams from Europe will participate and we’ll have very strong CL in Europe with only 12-16 clubs! And after few years with good games sponsors will come alone!