CEV: Cyprus hosts Switzerland and Croatia to set off the New Yea 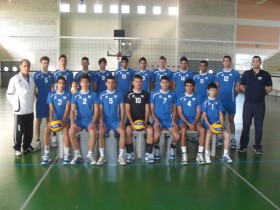 The Cyprus Volleyball Federation embarks on a season that will, for the first time ever, see its national teams competing across the board in junior, senior and Small Countries Division events. This is a bid to bring Cyprus Volleyball out of the confines of the SCD into the wider family of the sport on the so-called “Old Continent”.

To start this process, which is expected to take several years before bearing fruits, the men’s junior national team of Cyprus takes on Switzerland and Croatia in Limassol in a quest for a single qualifying spot for the second round.
“We don’t know much about our opponents, but obviously they are more experienced and with a stronger tradition behind them” says the head coach of team Cyprus, Costas Delikostas.

“Nonetheless, this is a unique chance to begin getting some exposure in European Volleyball”.

The tournament in Limassol begins with the two visiting teams battling it out between them before the hosts take on Switzerland and Croatia in succession. The top team of the Limassol tournament will qualify for the second round qualifier coming up next April in Ukraine.
“Cyprus Volleyball is coming out in full force with teams entered in all CEV competitions this year” stresses the President of the Cyprus Volleyball Federation, Damianos Hadjidamianou. “We want Cyprus to be present wherever there is an international event and upon this base we will try and build the future of Volleyball in our country”.

Italy: First half of season ends against Modena

Italy: We want to become strong as Cuneo