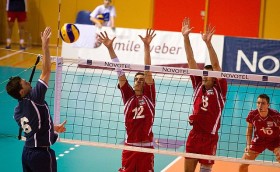 The program of the first competition day was opened by the match starring Germany’s youth girls’ national team and England which turned into a never ending battle that lasted for five sets. The game was attended by some 80 school pupils from the small towns of Remich, Strassen and Dudelange that were recently involved by the Luxembourgish Federation into a special project that aims at attracting as many youngsters as possible to the sport.

Cheered by this young audience, the players from England could eventually celebrate their win by claiming the tie-break with the score of 15-10. The first match of the men’s competition was claimed by Scotland that routed Denmark in three close sets (25-21, 25-20, 26-24).

Luxembourg women’s national team, placed under the guidance of the recently appointed head coach Detlef Schönberg, joined the tournament with a classy performance needing only three sets to beat Scotland. Luxembourg served well to gradually widen the gap in the opening set while the home girls totally dominated the scene in the second and third where Scotland committed quite many easy mistakes.

The men had to fight more to win their first game with England; the first set turned into a neck-to-neck race until Luxembourg sealed the final 25-23. The same plot unfolded in set 2 where the home guys did not finalize a set ball as the score stood at 24:23 before England turned the odds around for the final 24-26. In set 3 England was sidelined by the injury that affected setter Samuel Bragg and Luxembourg could go for a comfortable 25-17. H

owever, the hosts’ reception was very bad in set 4, so they initially trailed 6:11 and 9:16 before head coach Burkhard Disch replaced Tim Laevaert with Andy Koenig: his blocks, combined with the contribution of Jan Lux, fired the comeback, drawing level at 20 all before claiming the next five rallies to finish it off at 25-20.

CEV Latvian juniors get closer to ticket for second round

WCH BETTING TIPS: All or nothing