Baku, Azerbaijan, January 5, 2012. The 2011 club world champions of Rabita BAKU will be playing their first match of the New Year by hosting Germany’s DRESDNER SC this coming Tuesday for the fifth round of action in the prelims of the 2012 CEV Volleyball Champions League. 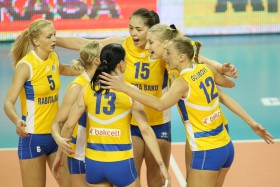 Rabita needs a clear win to stay in contention for the leadership in Pool B that currently belongs to Turkey’s Fenerbahce Universal ISTANBUL.

The players of Rabita enjoyed two days of rest after coming back from Basel where they won the Women’s Top Volleyball International tournament being always well guided by head coach Zoran Gajic who says about the upcoming match: “DRESDNER SC is a serious opponent and they play good Volleyball as we could see in the previous round in Germany. We have to play our best and even though we know that we are the favorites going into the match, we shall stay focused and keep up the great performances we displayed recently not only in the Champions League”.

American outside hitter and 2008 Olympic silver medalist Kimberly Glass adds: “They have showed a great fighting spirit in the first match so they are to be considered as serious rivals. We have to stay concentrated and improve our play match after match. This is the most intensive period of the season and all matches are extremely important”.