Limassol, Cyprus, January 6, 2012. Croatia scored an amazing victory over Switzerland on the opening day of the first round qualifier to the 2012 CEV Junior Volleyball European Championship - Men by cruising past with the final score of 3:2 (25-23, 25-22, 17-25, 27-29, 18-16). The result could well prove decisive in the quest for a berth to make it to the next round of the competition. 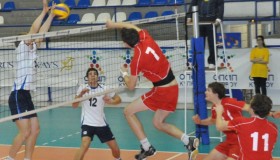 Twice Switzerland gained wide, early leads in the first two sets and twice Croatia came back to win them both for an overall 2:0. But still Switzerland wouldn’t give up as the boys around Urs Winteler closed in by winning the third set.

Then Croatia tried to pull off the same trick again, coming back in the fourth from 17:8 to tie the score at 24:24 and even blew a couple of match balls at 26:25 and 27:26 before Switzerland eventually forced the match into a tie-break.

After a very close fifth set, Croatia was first to reach match point at 14:12 and blew a total of four (while holding off Switzerland at one of their own) before clinching the set and the match.

Croatia’s Fran Peterlin was the man of the match and top scorer with 36 points. He was followed by Switzerland’s Nico Beeler who totaled 22. Switzerland out-served Croatia with 7 aces to 5, but trailed in blocking (16 stuffs to 18) and attacking (56 kills to 66).

“We played against a very good team that made very few mistakes” said Hrvoje Borovina, head coach of Croatia.

“It’s very hard to play against this kind of team, but I’m very happy for my players for winning this match as the final outcome was decided in little details. This result may push us forward now to the next match and maybe to the next round”.

“I am very disappointed from the result and I feel we should have won the match” said Urs Winteler, head coach of Switzerland, after the game.

“We have more qualities than Croatia as a team and we played quite good, but little mistakes cost us the match”.