The events of the FIVB Congress in Anaheim, USA saw impressive African Volleyball Confederation “CAVB” records in terms of the progressive development and improvements following the great support from the FIVB since the last Congress in Rome 2010. 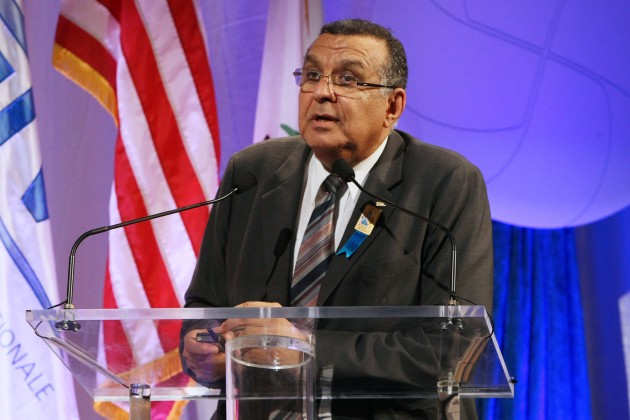 Africa has a valuable representation of 48 NFs in the congress among a total of 205 in the hall which is a record of attendance at the FIVB’s supreme governing body.

“The big support from the FIVB helped Africa to implement the ambitious development strategy since 2010,” CAVB president Dr Amr Elwani said. “Among the numerous records set in Africa in the last two years, was the participation of 43 NFs in the real continental activity during the past two years featuring a minimum of 50% increase in the number of countries than the past years. It was mainly due to the Continental Cup which is considered one of the main engines of development as it allowed many to countries to regularly participate in the activities.”

Beach volleyball featured more records in terms of the participation of 40 countries in the Continental Cup throughout its rounds. Five clinics were held ahead of the competitions attended by 41 countries.

African refereeing showed a great jump forward that was indicated by increasing the number of international referees from 77 in 2010 to 181 in 2012 marking an increase of over 235%.

“The great jump comes from the 23 courses organized along the continental regions in the last two years at the national, zonal and continental levels showing 269 participants,” said CAVB Referee Commission president Hassan Ahmed. “The inclusion of 12 female referees was also valuable, increasing from zero before 2010. Nine African countries recorded their first ever international referees during those years,” he added.

At the development level a record number of 60 courses were organized at all levels with attendance of 1,645 participants from 39 countries and conducted by 29 FIVB and CAVB instructors over 2,700 hours of practical and theoretical sessions.

For the equipment support, 50 countries were supplied with 13.420 balls, 280 nets and antennas, 376 beach VB courtlines, laptops with Data Volley programs software to 45 NFs and office equipment to 37 NFs.