FIVB Commission reports presentation continued at the World Congress in Anaheim, USA on Friday with both the Coaching and Rules of the Game Commissions reflecting on a lot of achievement. 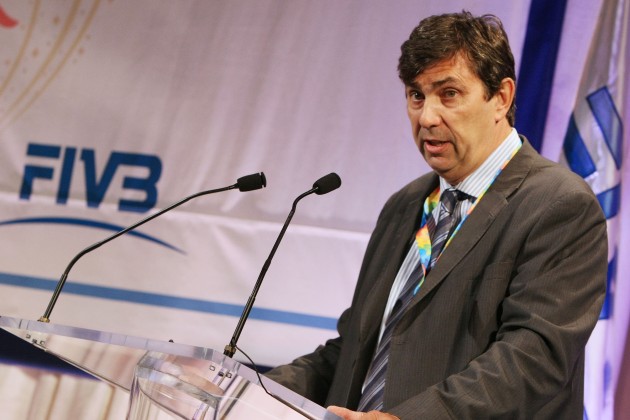 Blain referred to the success of 35 coaches courses in 2011 and 29 in 2012 which helped more than 60 countries worldwide,

Coaching Commission president Philippe Blain provided the Congress with key activities of the commission over the past two years, especially the communication with the other related FIVB commissions for better arrangement of the work of the coaches and the increased collaboration with the five Continental Coaching Commissions and the coaching support criteria for 2014.

“We made an analysis of the coaching activities during the competitions aiming at improving the competition regulations and match protocols,” Blain said. “The key success for our activities was the organization of 35 courses in 2011 and 29 in 2012 making a total of 64 courses which helped more than 60 countries worldwide. We also organized 45 technical seminars with assistance from players.”

He added that the database of coaches created by the Technical and Development department indicates that 5,000 coaches have been trained and accredited by the FIVB since 2002 and a large majority of them are Level I coaches, eligible to work with the grassroots which is a key factor in Category I and II NFs.

“Our main target now is support NF projects through courses and seminars aiming at increasing the number of coaches who can provide quality education to players,” he added.

FIVB Board and Executive Committee member Alexander Boricic commented that the best achievement in the last four years was the regular joint meetings with the other commissions especially the Refereeing, Technical and the Rules of the Game, which created a better environment of improving the FIVB’s coaching activity.

Rules of the games Commission President Alexander Steel pointed out that the major consideration in the commission‘s deliberation was the integration of beach volleyball and volleyball under a single umbrella with a coming together of common themes.

He described the most important rules changed specially the change of libero if he is injured or disqualified and the right of the team to replace him with the second libero if the team has in the list or to make re-designation from other player in the list.

ITA M: Lube Banca Marche presented its team… and wants to win it all