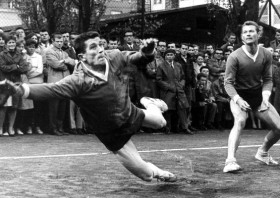 The double World champion and Olympic medalist was born in 1931 in Mostenica, a very small village located near Banska Bystrica.

After suffering a stroke this past November 29, Golian lost consciousness and spent the last days of his life undergoing medical treatment, eventually losing his fight for life.

Golian is a true Volleyball and sports legend in Slovakia, having medaled twice at the Olympics (silver in Tokyo 1964 and bronze four years later in Mexico City, where he was also the flag bearer of the Czechoslovak delegation at the opening ceremony).

He additionally took two more silver medals at the World Championships and another one from the European Champs, representing his national team for a total of 350 times in 13 years.

He is the only Slovak sportsperson having medaled twice in team sports at the Summer Olympiad.

After lecturing for twelve years at the faculty of Physical Education and Sports, he got his Ph.D. coaching at the same time and joining the highest Slovak sports institutions as one of the most respected officials.

He was awarded the “Pierre de Coubertin” medal by the IOC back in 2006 and one year later received the “golden rings” from the Slovak Olympic Committee.

“Bohumil Golian was a true personality and he was still active visiting Volleyball matches and supporting our national teams. He spent his last nice moments this past November as we hosted the Olympic pre-qualifier in Poprad and he also attended the prelims of the European Championship in Prague. I visited him while he was hospitalized and he was happy to be informed that our men’s national team was awarded as team of the year in Slovakia” he adds.

Golian is survived by wife Marta and 2 children, son Robert and daughter Katarina.

Elena Litovchenko for WoV – “We gave...