Luxembourg, January 14, 2012. The European Cups Commission (ECC) chaired by Mrs. Riet Ooms got together in Luxembourg this past Thursday and Friday for the very first meeting with the composition resulting from the elections that were staged this past September in combination with the XXXII CEV General Assembly in Vienna. 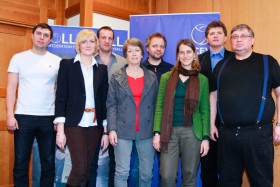 “I am very proud that this is the first and only Commission so far in CEV history with three female members” says Mrs. Ooms, as Natalia Kostulska of Poland and Giovanna Sassi (Italy) have joined her in the ECC.

This meeting was a very useful chance for the ECC to review the current European Cups season and also to discuss some ideas or projects to be submitted to the CEV Board of Administration in order to guarantee a bright future to club competitions in Europe.

“We especially have been trying to work out some useful ideas that may help us reduce the costs for the clubs participating in the European Cups, as we know they are all being deeply affected by the financial crisis that has hit all European countries” stresses Mrs. Ooms.

“I am also very pleased to see that even the newcomers in our Commission have joined the discussions bringing in their own ideas and thoughts, thereby contributing some added value in comparison with the past”. “It is a unique opportunity for me to see things from a totally different perspective” says Giovanna Sassi, who has been working for the Italian Volleyball Federation for 20 years.

“I will have pretty much to tell and to share with my colleagues and especially with the clubs. Being an ECC member helps get a general overview of the whole thing; you also gradually have to learn that you do not have to represent the instances of your own country, but to study solutions and work out proposals that may generate a benefit for all parties involved. It is a great challenge but I am already looking forward to the next meetings” says the daughter of Fabio Sassi, a long-time member and also former President of the European Sports Organizing Commission (ESOC) who stepped down from his position this past September.

With the European Cups season currently running at full speed – and the last leg of the League Round in the 2012 CEV Volleyball Champions League coming up next week – the ECC did also start the preparations for the Drawing of Lots for the Playoffs 12 and 1/8 finals which is scheduled for next Thursday, January 19, at 2.30 pm and where the organizer of the men’s final four will be also announced.

CAVB: The Olympic Qualifications begin the 2012 volleyball fever in Africa