Cospicua, Malta, January 14, 2012. In the qualifying group B of the 2012 CEV Junior Volleyball European Championship – Women (Small Countries Division), currently being played in Malta, Cyprus and Northern Ireland obtained their first wins after beating Scotland and Malta respectively with the same 3-1 score line.

In the first match of the first day, Cyprus had the better of Scotland, with the latter showing considerable technical and tactical skills, at moments playing better than their superior opponents, as was also confirmed by their coach Vincent Krawczyk in the post match comments.

As it was expected, Cyprus started the stronger of the two, taking the first set 25-20 and completely dominating the second set 25-12 with Eleana Petrou and Antonia Theoti doing most of the damage. However Scotland, whose Sophie Hunter and Claire Ramage garnered 12 points each during the match, fought it out bravely in the third set, finally winning this set 29-27 after 33 minutes of exciting rallies. Cyprus’s girls re-composed themselves for the fourth set, and after taking a 13:5 advantage, kept cool to finish off this match 3-1 in 114 minutes. 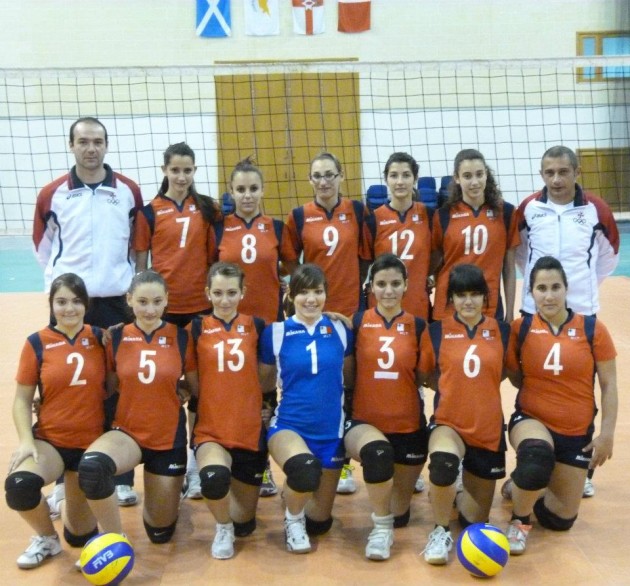 In another long match, lasting just over 2 hours, Malta and Northern Ireland fought it out bravely, point by point, with the Northern Irish girls finally winning 3-1.

In the first set, Northern Ireland was slightly superior, going 8:4 up by the first technical time out.  However, the local girls went close to equalize at 20:21, before losing 20-25. Northern Ireland kept playing well at the start of the second set, until Malta went ahead at 21:20, after a hard working comeback. From then onwards it was a point by point situation, until the Irish girls won this set 25-23.

The local girls however were not demoralized, and with Sarah Spiteri and Denise Grech on fire, these two girls obtaining 28 points between them throughout the whole match, Malta won the third set 25-15 to close in on their opponents. This resulted in a tough fourth set, with the two teams equaling themselves for much of the set, until Northern Ireland, who had Alice Harkness and Sorcha Maguire as their best players, took a decisive break at the end of the set to win this match 3-1.

In the post match comments, Irena Mihneva, the Northern Ireland coach, claimed that this was a very stressful match for her players and praised Malta’s setter, Amy Guiga, for playing a very good match. From their side, Malta’s coaches, Dejan Desnica and Carmel Gauci, praised the local team for its efforts, pointing out that Malta is by far the youngest team of the tournament, with most of the girls playing for the first time at this level.

CEV: Liechtenstein qualifies for SCD final round after scoring second win in Tórshavn