CEV: Liechtenstein qualifies for SCD final round after scoring second win in Tórshavn

Tórshavn, Faroe Islands, January 13, 2012. The girls of Liechtenstein qualified this afternoon for the final round of the 2012 CEV Junior Volleyball European Championship – Small Countries Division after they claimed a second victory in prelim Pool A that is taking place in the capital city of the Faroe Islands 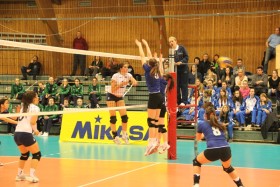 Liechtenstein downed the home heroines in straight sets (25-9, 25-14, 25-13) with the Faroese players starting very badly and never getting back on track.

The Faroe Islands played a little better in the second and third set but they never really challenged their opponents.

A few hours earlier Luxembourg had scored its first win in the tournament by edging Ireland also in straight sets (25-19, 25-15, 25-16) thereby remaining in contention for a spot to join the final round of the Championship scheduled for mid April in Cyprus.

The match starring Luxembourg and the Faroe Islands will be a very exciting affair as both teams have been edged by Liechtenstein but proved dominant while playing Ireland.