Davide Kovač for WoV: „I’m not running away from my father’s shadow“

Being a son of a famous athlete, especially an athlete who won the gold medal in the Olympic Games, can be a burden. That burden is even heavier if you compete in the same sports discipline as your father. That’s the case with an 18-year-old volleyball player Davide Kovač, a son of 2000 Sydney Olympics gold medalist Slobodan Kovač. Slobodan is a highly successful coach at the moment while Serbia U20 national team outside hitter Davide tries to build his name in the world of volleyball. 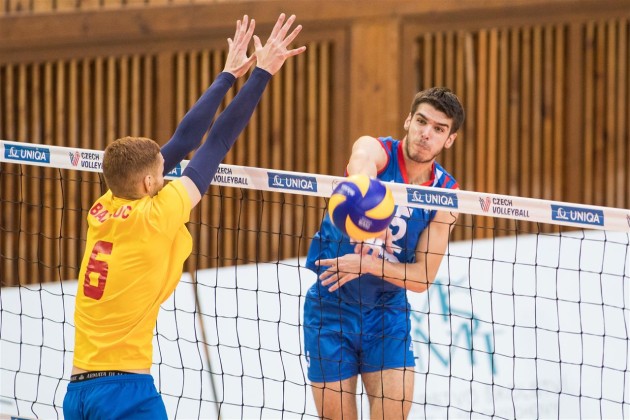 That’s the case with an 18-year-old volleyball player Davide Kovač, a son of 2000 Sydney Olympics gold medalist Slobodan Kovač. Slobodan is a highly successful coach at the moment while Serbia U20 national team outside hitter Davide tries to build his name in the world of volleyball.

Last season you played for Niš in the Serbian Superliga. How do you asses the quality of your play?

„Things have changed from the beginning of the season to the end because, in the beginning, I had a chance to play alongside famous and experienced players, internationals, who were in the club until the middle of the season mostly due to the fact they were waiting for better offers. My role in the team was serious and they always watched my back and helped me adapt better to playing in Superliga which was very interesting. Unfortunately, most of these players left and those who remained possessed quality but were not on a level as the older ones. The coach gave me a chance to be the first option in the attack and the play of the team was based on me,“ Davide Kovač began his interview for our website.

You made your debut in a professional volleyball at the age of 14 while you played for Radnički Kragujevac. So what does it feel like to make a senior debut while still being a kid?

„I’m still considered a kid but making a debut at the age of 14 and also being a son of a famous volleyball player is hard because everybody had great expectations from me and I wasn’t experienced in any sense. At that moment, I just started to play volleyball and physically wasn’t on a senior level. But, in the meantime, I’ve learned a lot from the older guys.“

Knowing the fact you were born in Italy, you could choose to play for both youth teams of Serbia and Italy. Why did you choose to compete for Serbia?

„Although I was born in Italy where my father spent a significant part of his career and lived there, my entire family and people I know are from Serbia. So, I decided to play for Serbia because of my family.“

You are quite active when it comes to playing beach volley and you competed a lot in it in the last few years. Have you ever had a dilemma what to play professionally – beach volley or indoor volleyball?

Do you feel some kind of pressure in your career knowing that you are a son of the Olympic Games gold medalist?

„There is no pressure and I’m not running away from his shadow. I am very proud to have a father like him. Since I’m a son of a professional volleyball player it is inevitable that people compare me with him. Many say that my moves on the court resemble his moves. As a coach, he’s one of the best in the world, having so many successes with Italian and Turkish teams. As a player, he won one Olympic gold and my goal now is to outpace him! The most important thing is that he gives me support every day and gives me advice on how to raise the level of my play and learn from mistakes.“

Where will you play next season?

„After the last season which was successful for me personally but not so much for the club because it got relegated, as a young player who’s 18 years old and talented, I showed that I can play on a high level and that I’m capable to compete with older guys. There was a lot of thinking because I received offers from Italy, Poland, France, and many Serbian teams but with the help of my manager and parents, I chose Castellana Grotte and Italian SuperLega which is the best league in the world and in which I’ll be able to improve my self more. I’m projected to be the third outside hitter in the team and to give support mostly in reception.“

TRANSFERS FROM POLAND W: Grejman in Chemik, Podolec in Krakow

Volleyball superman from Canada – He has...